If you don't know his story here's a thread about it-

Sergeant Alwyn Cashe gave his life in service to his country during the Iraq War in 2005. On October 17th of that year he was traveling in a Bradley Fighting Vehicle that took the full force of an improvised explosive device.

The vehicle caught fire immediately and Cashe, who was only slightly injured managed to get out of the vehicle straightaway, helping the driver to safety. However, he was more concerned with the situation a half dozen of his team were in.

When one man managed to force open the rear hatch, without showing any concern for his own survival, Cashe climbed back into the burning vehicle to rescue them. During his efforts he became soaked in fuel and caught fire himself.

He succeeded in getting all six to safety, and an interpreter, in three forays back into the inferno, while under enemy fire, dragging them through the flames.

‘As we were fighting the fight and clearing the scene, he wouldn’t leave,’ said Major Jimmy Hathaway in 2014, ‘He wanted to make sure all of his guys were out first even though he was burned over most of his body. He was still more concerned about his guys getting out than he was.’

Major Hathaway was Cashe’s commanding officer with A Company 1st Battalion, 15th Infantry Regiment, 3rd Infantry Division. Sergeant Alwyn Cashe was taken to hospital, but his injuries were grave, more than 70% of his body had been burned, and he passed away a few weeks later on the 8th November. He was thirty-five years old.

Explaining his actions, he said, ‘I had made peace with God, but I didn’t know if my men had yet.’

For his heroic actions Cashe was awarded the Silver Star, but many felt that fell short and a campaign started to award the Medal of Honor. Now it seems that support for the award has reached the office of the US Defense Secretary Mark Esper who has said he agreed with the argument put forward.

In a letter dated the 24th August 2020 Esper confirmed that he had reviewed the Sergeant’s case and, although he was in favour, the decision to approve the time waiver lay with Congress, and the final decision to award the Medal of Honor would rest with the President, the official Commander in Chief.

Representatives in Congress, Democrat Stephanie Murphy, and former Green Beret, Republican Michael Waltz, both from Florida, and Texas Republican Dan Crenshaw, a former Navy Seal, brought the legislation, which passed unanimously, to the House that removes the five year limitation that currently exists, opening the way for the posthumous award, and possibly help other campaigners.

jsmith6919 said:
Explaining his actions, he said, ‘I had made peace with God, but I didn’t know if my men had yet.’
Click to expand...

That's the line that gets me every time too, salute to a better man than all of us 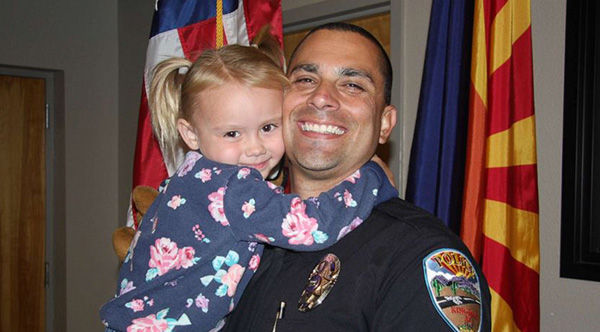 This is Lt. Brian Zach of the Kingman Police Department in Arizona. He just adopted a little girl he met during a welfare call in 2018.

I remember Dane Cook falling off the radar but never heard about his brother stealing all his money, pretty good attitude and recovery on Danes part:

yimyammer said:
I remember Dane Cook falling off the radar but never heard about his brother stealing all his money, pretty good attitude and recovery on Danes part:

Yeah it's got to suck. I've heard him talk about it on a couple different podcasts and I was impressed with his attitude about everything. I think he's a terrible stand up but seems like a good dude (the accusations of joke stealing notwithstanding).