jsmith6919 said:
I was wondering why she was trending on twitter, anyway here ya go @Iamtdg

1bigfan13 said:
I'm trying to save the man from having an aneurysm and you're out here countering my efforts.

I appreciate your effort. @jsmith6919, on the other hand can suck a whole bag of dicks for posting it.

Bulls hired Arturas Karnisovas and for the first time in my lifetime they've made an external hire for someone to run their basketball operations. Was previously the Nuggets GM and worked under Morey in Houston, so finally the front office is going to be brought into the 21st century.

Gar Forman, i.e. one of the worst personnel men in the league, is out, and Paxson is moved into an advisory role, which he deserves given that Forman is primarily the one at fault for how the last 5 or so years have gone.

Probably the best day for Bulls fans since they won the 2008 lottery.

I hate high schoolers going straight to the nba in the past. Going to the g-league for a year or two is a good compromise.

Genghis Khan said:
I hate high schoolers going straight to the nba in the past. Going to the g-league for a year or two is a good compromise.
Click to expand...

It's definitely interesting to see a guy who could be potentially a number 1 pick go that route. If you don't care about a degree why not go get paid $100,000 to go play in this league.

I hated that guy so much.

Genghis Khan said:
I hated that guy so much.
Click to expand...

I've never heard of him

Milwaukee was for some reason a haven in the 80s for tall, oafish, goofy, scrappy white guys and I hated them all. Him, Randy Breuer, Krystoviak, Fred Roberts, even Jack Sikma was annoying and he was a legit player. 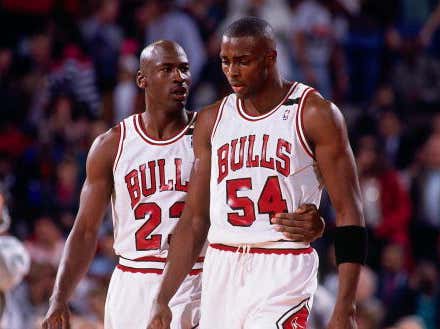 Just an UNBELIEVABLE string of quotes by Horace Grant about Michael Jordan and the last dance here. I don't even know where to start so I think I will just pick the three most salacious ones"I would s...

Does anyone know what "the leak" was Horace and MJ are beefing about?

yimyammer said:
Does anyone know what "the leak" was Horace and MJ are beefing about?
Click to expand...