NoDak said:
It's a lot more than just a movie quote. Just sayin'...
Click to expand...

I know, but I was trying to make it easy to understand. No offense, LT.

Iamtdg said:
I know, but I was trying to make it easy to understand. No offense, LT.

LT hasnt discovered yet that movies have quotes.

Lombardi: The Eagles front office and Jeffrey Lurie did not trust Doug Pederson 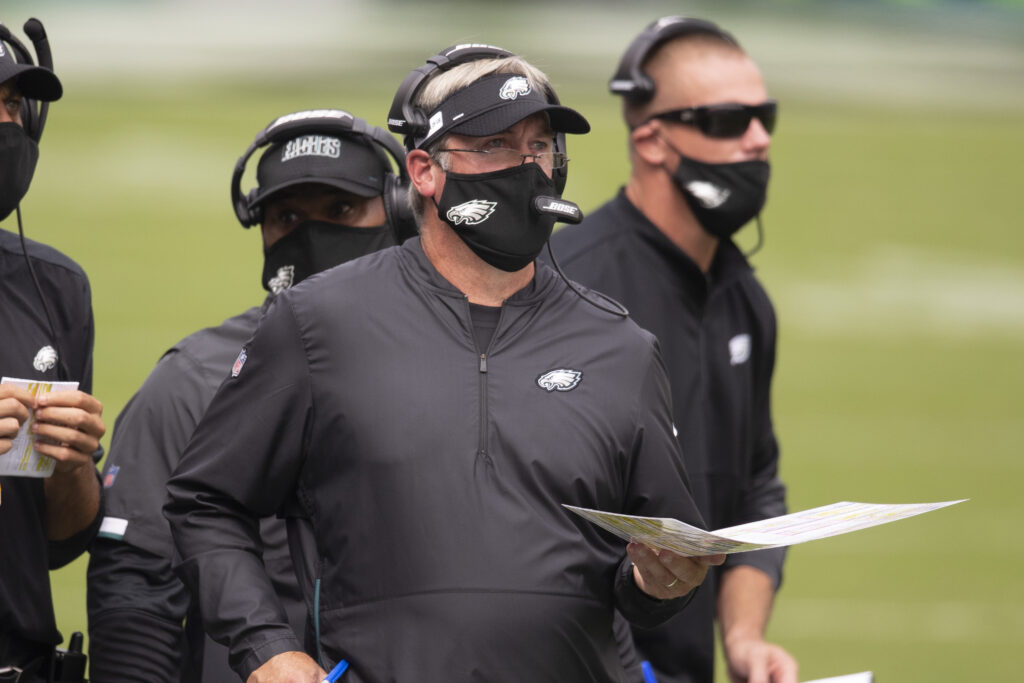 If NFL fans could follow a rumor from start to finish, it would be an education into the back channels of propaganda that most NFL teams rely on to get their side of the story in front of the general public. Rumors and headlines in the NFL are similar to what the CIA refers to as “black ops.” Black ops is a covert or clandestine operation with no attributable organization attached to the procedure to enlighten those on a version of a story — not necessarily the truth, but a version of a myth they want to create as truth. For NFL teams, the myth contains a persuasive argument, albeit a rather unrealistic one, to persistently sell their story to their fans. Whoever controls the perception controls the narrative, regardless of the truth. Over the weekend, NFL fans got exposed to the NFL version of a black-ops maneuver.

Chris Mortensen of ESPN reported on Sunday that Eagles coach Doug Pederson’s job was not safe, and that things had changed dramatically since the report the week before that all but assured Pederson’s return. Mortensen is a veteran of black-ops operations; he is great at executing these campaigns with flawless reporting, driving home the key points. He made his career out of understanding how the game within the game works in the NFL. Mortensen will never spread a story about a pending blow-up in the organization without a source on the inside of the Eagles organization. Mortensen is not relying on hearsay or second-party information. He has a direct pipeline into the Eagles, not because he found a mole, but because the Eagles need to spin their story. The Eagles decided they wanted to fire Pederson. Before they could execute their plan, they wanted to control the narrative, explaining their change of heart so as not to appear as if they were liars or going back on their word. There had to be a “new” reason — an action to cause their reaction, which is why they needed Mortensen’s help. And what better way to explain their change of heart than on Sunday morning, in front of a national television audience before all the games?

Once Mortensen broke his story, Doug Pederson’s future as the Eagles coach was coming to an end. Even though the story offered some hope of a pending meeting to fix the unfixable problem, Pederson and his agent Bob LaMonte knew when the story broke that there would be no turning back. Slightly more than 24 hours after Mortensen reported the change of heart from the Eagles on Pederson, Eagles owner Jeffrey Lurie fired Pederson, attributing his decision to their disagreement regarding the collective vision of the future.

The “vision” of the future is often a word we hear tossed around in NFL cities after the coach or general manager has been fired. The lack of alignment toward a similar vision is always the signal that a change is needed, and marks the end of the road for the coach. Is that real? What coach does not want more time to fix the problems? What coach doesn’t love to hear his owner proclaim: “We need to rebuild”? Ninety percent of the current owners never use the word rebuild; they expect to win and compete for a Super Bowl regardless of how unrealistic they sound. Taking on a rebuilding project means more guaranteed years for the coach, which means he can fix the problems the right way, with progress as the measuring stick, not wins. How wonderful does that sound?

So what is the real truth? Or what is the version of the truth that comes closest to being correct? From Pederson’s standpoint, after winning a Super Bowl three seasons ago, he wanted to gain some respect from those above him concerning decision making — particularly with formulating his staff. Last year, he announced that his offensive coordinator Mike Groh would return, only to quickly retract the story the next day when Groh was released. We all know Pederson did not want to fire Groh, so who did? That answer does not require much thought. The larger issue or problem is if Pederson is not trustworthy enough to assemble his own staff, why is he trustworthy enough to fix the problems or make any high-level decisions? It’s common for the front office to approve of some hires, especially at the critical staffing positions. Past wins often bring a sense of confidence concerning making future decisions, which Pederson thought he had accumulated by winning the Eagles their only Super Bowl. It’s one thing to accept coaches on your staff who you never worked with before as a first-time head coach. Now, after winning a title, you gain zero stature? Zero confidence from those who have watched you work to know what is in the team’s best interest? That had to be hard for Pederson to accept — which is why the meeting did not go as planned.
Lurie does not see himself as a “hands-on”, Jerry Jones-type owner. He has said: “you never want to be too involved,” and “you never want to micromanage, and I’m very, very sensitive to that. You’ve got to trust the people around you.” But clearly, Lurie did not trust Pederson when it came to staff decisions or being objective when evaluating coaches who are also his personal friends. Lurie felt the need to be involved.

The Eagles don’t have minor issues that require a quick fix. Lurie is correct in proclaiming the team needs a rebuild, a reconstruction — which will take a coach who is willing to work under the direction of his front office. The Eagles have much more than a Carson Wentz problem. They have a history of injury, a bad cap, an aging team, a lack of talent problem, and most of all, a decision-making problem when it comes to the draft. Selecting J.J. Arcega-Whiteside over DK Metcalf in 2019, then selecting Jalen Reagor over Justin Jefferson in 2020 sends red flags to anyone paying attention that the process might be misaligned, that the key decisions are not correct. In essence, they have every problem associated with most bad teams — all rooted in decision making.

Lurie believes his front office is a general manager factory evidenced by the recent hirings of former Eagles front office personnel men Andrew Berry in Cleveland and Joe Douglas with the Jets. That all sounds wonderful in theory, yet a front office’s goal is not for their employees to get better jobs, but to make the team better — which under Howie Roseman, the current general manager, the team has failed to accomplish. How do Berry and Douglas’ promotions help justify the Eagles’ front office talents and procurement? When the Eagles hold a press conference announcing their next head coach, he will sit next to Roseman and Lurie (assuming we are off Zoom by then), and will be the third coach Roseman has worked alongside, which is rare. Most general managers get one, maybe two coaching hires. But Roseman, because of his close relationship with Lurie, is immune to any blame for past mistakes. The incoming coach will know the dangerous terrain he walked into related to Roseman and Lurie’s relationship. The new coach will have made phone calls to former Eagle coaches Chip Kelly, Andy Reid and Pederson for their candid assessment of how the operation works inside the building. Both Pederson and Roseman are represented by LaMonte, making the truth even harder to find. LaMonte cannot infringe upon his own relationship with Roseman to help Pederson’s cause. He has to remain neutral, even though from his relationship with Reid and other Eagle coaches, LaMonte knows better than anyone how their operation works internally. But he is too smart to reveal the truth — he protects both sides.

Despite the politics involved, the new coach will learn that Roseman is involved, and is masterful at skirting blame, and at always having the test’s answers before the test begins. The coach will learn that Roseman’s partnership is not with him, but with the owner. If this new coach is a LaMonte client, he will be educated on making this work for the short-term, thus enhancing his career for the long-term. He will need to understand the dangers that await before he accepts, following the old saying: “The jungle is never as dangerous when you know the trails.” He will also know the Eagles are wonderful at crafting the right black-ops maneuver.

The Eagles will find someone to fill their position, but will it be the right person or just the person who fits exactly what the front office wants? The Eagles are skillful at creating the narrative for why Pederson is gone; can they be as skillful at fixing their team? Only time will provide the answers to that test question that no one currently holds.

ravidubey said:
Just picking his brain about a division rival like they did with Moore
Click to expand...

I sincerely doubt coaches give team secrets when they interview. After they are hired? Sure. But not before.

I think they ask coaches questions about their own personnel and where they need help, how they would use them, etc. more than about the team they're from.