Sturm: Introduction to 2020 Cowboys defense - Nolan’s task is simple — get the ball back 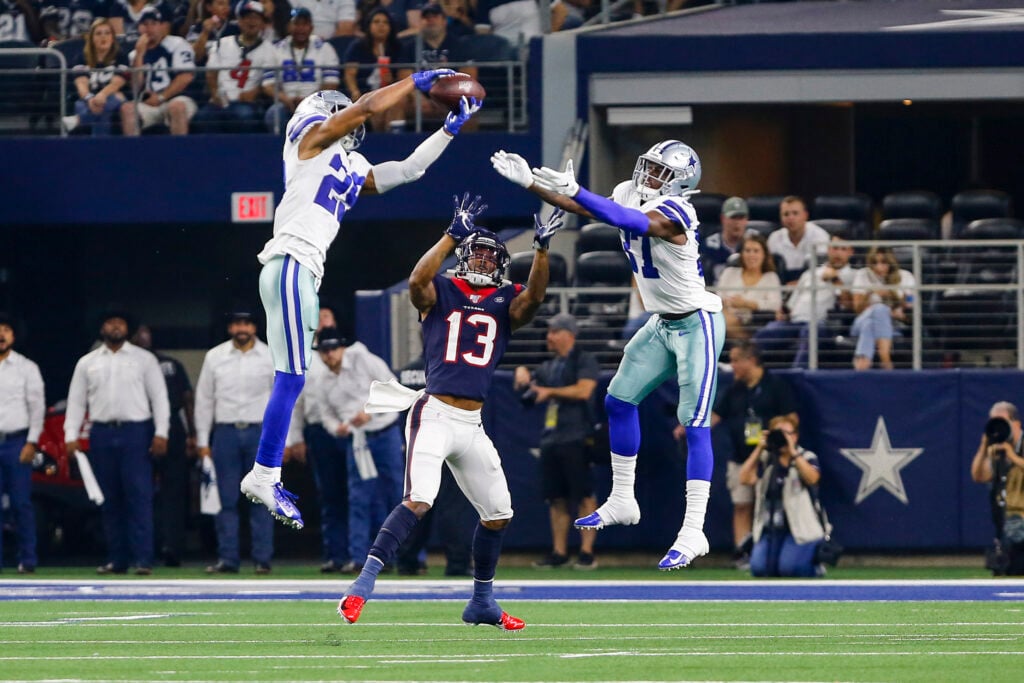 By Bob Sturm 1h ago

Every Wednesday, I attempt to give you some meaty defensive analysis that mirrors what we do on Tuesday for the offense. Unfortunately, due to the nature of the sport, there is less tangible and consistent information given out. Defense is more about reacting to your opponent than it is calling whatever you want. It is opponent dependent, and therefore, we have to be careful not to get too carried away with our analysis if we see that in the first three weeks they play Sean McVay’s, Matt Ryan’s and Russell Wilson’s offenses only to then later deal with the NFC East teams and assume that they have improved. Most weeks, we should measure against the specific opponent rather than the league norms. There is nothing normal about the week-to-week challenges presented to a defense.

But we track all the data we can here, in an attempt to quantify the defense’s ability to make stops and help this team win.

Here are the 10 data points we keep on an annual basis for each team in the league. Again, like I said for the offense, these are not necessarily the measurements that mean the most. But they should, when looked at together, provide a portrait of what this defense has been capable of. By drawing a comparison with the rest of the league, we can find where excellence lies and what poor performance looks like. Without it, we are merely guessing.

The 2018 group felt like a very good Cowboys defense. Who can forget the stretch that culminated in the shutdown of the Saints offense?

The 2019 unit felt quite poor. In a game at a similar part of the season as the Saints affair the year before, the Mitchell Trubisky humiliation in Chicago told a very different story.

But we should never go by feel. Let’s use these 10 data points to hopefully cut through some noise: 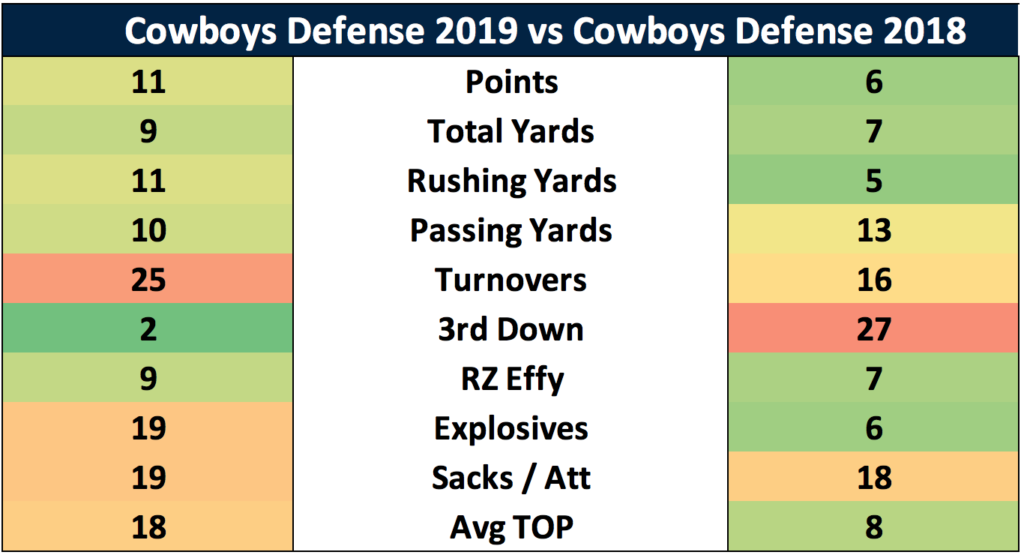 There are several important numbers that rank the Cowboys in the top 25 percent of the league in 2018: Points allowed, yards allowed, rushing yards allowed, red-zone touchdown percentage against, explosive plays (20+ yards) allowed and the less important time of possession. (I promise I only keep it because it tells us about the personality of a team. Otherwise, I see no real important readings there.)

Also in 2018, the team couldn’t get off the field on third down.

In 2019, we saw this defense improve on its biggest weakness (the very volatile third-down defense), but in exchange, it appears they went backward in almost every other stat. To be fair, some were fractional, but dropping so far in takeaways (again) and explosive plays allowed is not great.

Last year, I sat in this space and our discussion was primarily as such: How does the 2018 Dallas Cowboys defense — one largely homegrown in its talent — take the final step from being “very good” all the way to “elite”? It needed more big plays, more takeaways, more short fields and, of course, more game-changing moments.

The NFL creates fewer turnovers than ever before. But turnovers still transform a defense from good to great. As you know, this has never been a Dallas specialty.

Well, they went backward when they need to go full-steam ahead. The average NFL team comes up with the ball around 21 times per season. The best teams can still get to or over 30. Dallas came up with 20 in 2018 and our thought was simple: Figure out a way to bring that up to 30, and you will certainly win 12 games with this offense.


I have said this before, and I will say it again: People have their own fuzzy memories about that magical 2014 campaign, the transformation of Jason Garrett football and Romo’s best season. I think we have overcomplicated something that isn’t that tough to figure out. The defense gave the offense short fields all day with their only 30-plus turnover season in ages. Football is so much easier this way.

That leads us to a clear next question: “OK, how do we find turnovers?” And that is where things get far more subjective and filled with guesswork.


Make no mistake, however: This is where the simple discussion of complementary football should exist.

What is the Cowboys’ lead unit? Clearly, looking at their investments will lead you to conclude it is the offense. This extends from draft capital to total cap allocation. Dallas has spent to make its offense a force.

What should we be doing with the other side of the ball? Finding the tactics that make it most about helping the offense. Other franchises might build in the opposite way. Heck, there are years where this is Dallas. But not 2020 or 2019 or 2018. These defenses must exist fully to amplify what the offense does.
What does that look like?

I have written about this a few times this offseason, but I definitely look to teams in this league that do this every year and how they try to have their offensive and defensive styles sync up.

For me, it starts by saying that if we are an aggressive offense, the defense cannot be passive. What does that mean? Well, you can play defense defensively by attempt to limit damage, play safe and not cause your own issues. Or you play defense offensively. Aggressively. You try to dictate terms, you make the opponent uncomfortable and get after them.

Now, what do you see in this next visual aid? 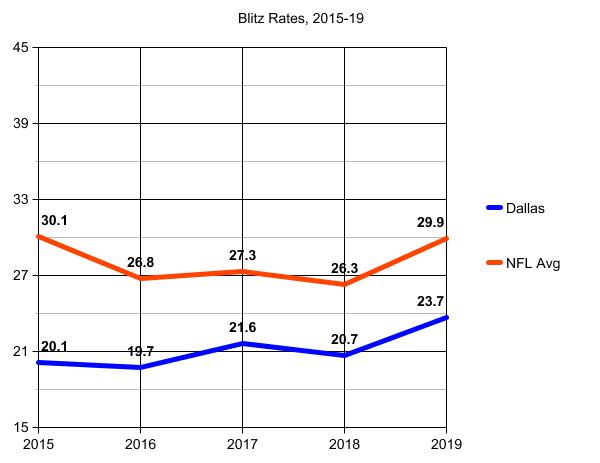 The NFL average is far from the top, of course. But Dallas has seldom been closer than six percentage points. Often that means they blitz at 75-80-percent the rate of the average defenses. Top defenses? Not even close.

You always match a blitz with a coverage. If you are playing a Cover 3, you are using up to seven defenders to cover zones. That means only four remain to blitz. If you do blitz, you’ll generally play man defense behind it. See: Third downs, where Dallas actually did raise their blitzes to league average. 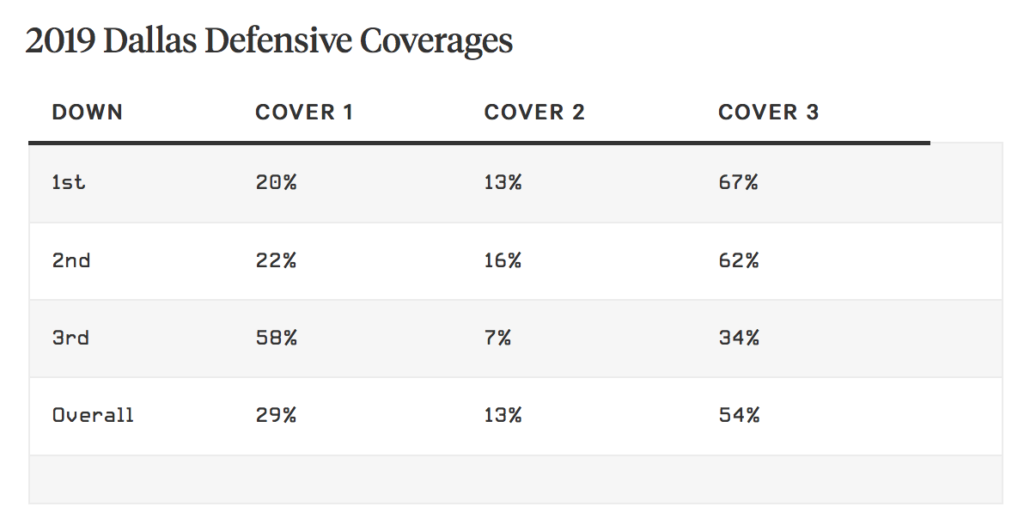 Again, the Cowboys decided they needed a change. I do not believe they seriously considered Kris Richard or Rod Marinelli for future positions here. They tried their ideas repeatedly and found a lack of takeaways was a constant. This was tilting the field against them. When that happens, you are asking more of your offense — not less — by starting every field position deeper than your opponents every week. And no matter how careful your offense is with the football, they still lose the turnover battle because the defense can’t get it. They were determined to change in 2020 long before they hired the new help.

I want to be really clear when I discuss blitz rates and other aggressive defensive tactics. There are bad teams that blitz all of the time. There are good teams that never blitz. Never, ever confuse attacking as shorthand for dominance. Blitzing can often be an act of desperation. I constantly repeat a coaching quote I learned years ago: “We blitz as a weapon, not as a necessity.” If you have to blitz, you are in trouble. But if you believe the best way to defeat an opponent is to terrify them, then it can really be something special.

You already know some of this intuitively if you closely follow the Cowboys, but since the Rob Ryan era (2011-2012), Dallas’ defensive philosophical shift has been based on two basic premises: They don’t blitz and they very seldom play man coverage. I am speaking in absolutes, and when we describe seven years and 7,500 plays, I am only speaking with regards to the majority of the time. But that is basically what they have done, particularly under Rod Marinelli.

Here is a look at the Dallas pass-coverage ledger for 2019:

You either get the ball, or press the issue to make the opponent give it back. As Kansas City has demonstrated, it’s almost fine if the opponent scores. Just do it quickly, because we’re willing to bet our offense is better than yours.

Here’s the bottom line, and a conclusion I have had for a while: This defense needs to stop playing simple coverages that are obvious by down/distance and start taking chances to force the issue. Will they get burned? Probably. Deal with it. The long game is based on putting teams into uncomfortable tempos and decisions. Over time, if you do it every week, your win total should increase.

Dallas went backward at allowing big plays, but actually had the takeaways diminish. Not a great combo.

SPLASH PLAYS
I am particularly proud of the “splash plays” metric. In the days of analytics, I wondered if it would be able to hold up to scrutiny when we now have expected points models available. I am thrilled to report it did stand the test of time, and the way we have been doing things here seems to agree with the new analytic models that you see, including from our friend @CowboysStats.

This means we were on to something nine seasons back and our findings remain useful here in 2019!


What is a splash play? I am happy you asked, and I spent an entire entry on it not so long ago here. 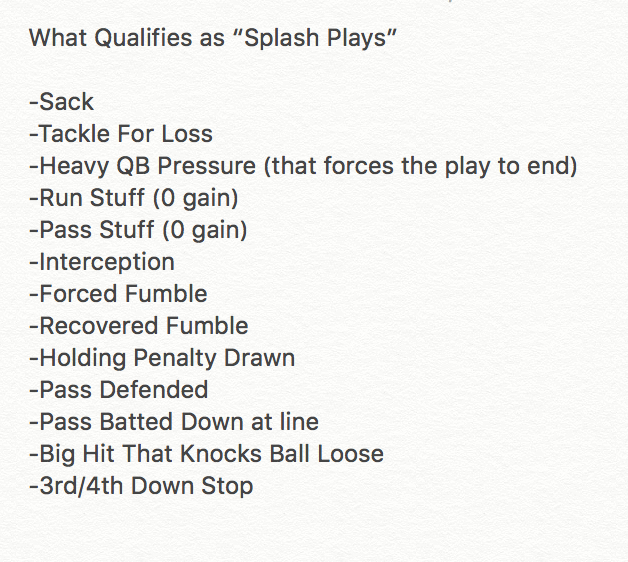 I go through each game looking for these. Here is what the last three seasons look like for the Cowboys defense (using players who have made at least 10 splash plays since 2017 in a Dallas uniform):

These numbers help us see who is making a real difference, and it is far more thorough than just adding sacks and interceptions like we did in the old days. We can divide by snaps played for even more accuracy, but I don’t want to make your head spin too much.

Each week, we will examine the defense using these means.

Lastly, I wanted to answer the questions I first posed back in January as to the offseason objectives.

Overall, I think this defense has a real chance, but while much of the league seems to say to invest in coverage over pass rush, it is clear Dallas disagrees. The secondary requires a lot of guesswork right now with Darian Thompson somehow a starter (for now; Brandon Carr waits in the wings). With Chido Awuzie, Xavier Woods and Jourdan Lewis all expiring this season, the shakeups back there are likely far from over.

Get early leads with the passing game, unleash Lawrence/Griffen/Smith, let the secondary hunt the ball, and bleed the clock with Elliott.

Simpleton said:
Get early leads with the passing game, unleash Lawrence/Griffen/Smith, let the secondary hunt the ball, and bleed the clock with Elliott.