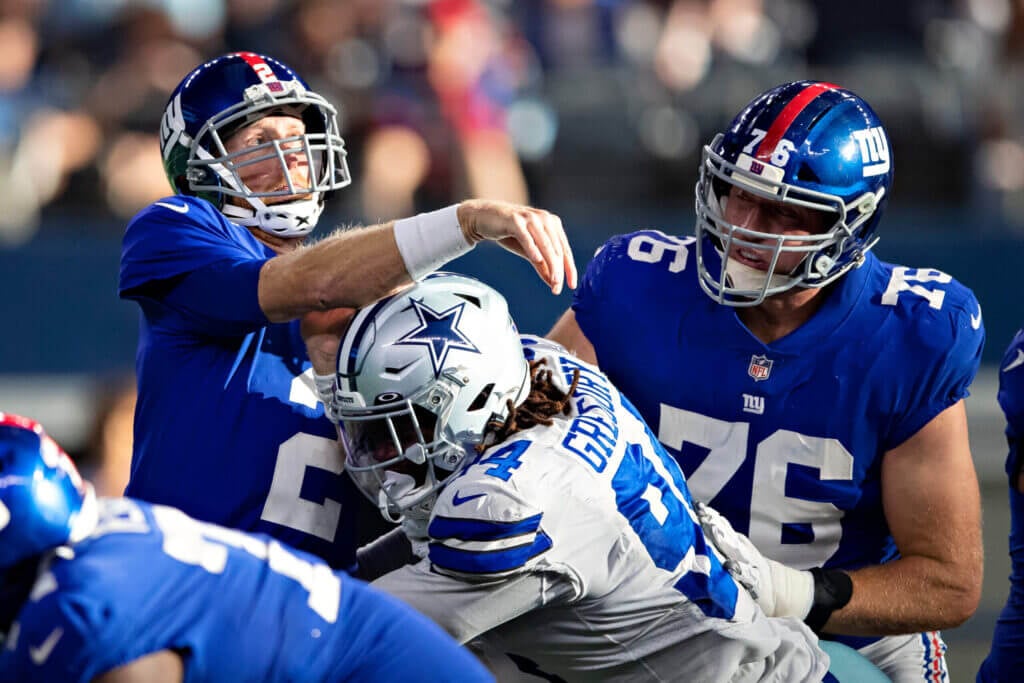 Trying to track a football team’s growth is similar to measuring your child’s growth — it is certainly not going to yield many results if you do it too often. If you are waiting for your kid to come down to breakfast so you can make them stand up straight and see if they grew overnight, you will likely not see much. But if you do it every 90 days or so, the differences might be stark.

Such is the case with the Cowboys’ defensive rebuild. We have written many pieces on it, so you can fall as deep down the rabbit hole as you wish. It is probably all necessary to fully comprehend what is going on — at least my best guesses and summaries of reams of data and notebooks on small turns in the path — but it is all tied together as one team’s approach to maximizing its results.

When we watch sports, we are quick to conclude that the team with the best talent wins. But there are too many obvious reminders that this isn’t always true. They have to fit together. They have to make each other better as a group. And like a great symphony, they can all be master musicians, but if they are all doing their own thing and not working together to make something special, disappointment is on its way.


We are seeing with the local basketball team that sometimes new coaches get just one or two games before people want to draw massive conclusions about whether the hire was a good one. Usually, it matches perfectly with the confirmation bias each journalist is seeking rather than the evidence that would provide indicators of success or failure. But regardless of what one sees, they have to go back to a cliche that stands the test of time by basically describing the test of time: Rome wasn’t built in a day. None of this is a magic formula that requires a few actions followed by yelling, “Presto!” It just doesn’t work that way.

So, let’s go back to the start. When Jason Garrett and most of his staff were dismissed in 2019, nobody thought Mike McCarthy was the obvious hire. It caught most of us by surprise. But I did feel somewhat qualified to write a massive breakdown of McCarthy’s positives and negatives. It is interesting to read 22 months later. And much of it has been exactly as we figured.

Here is one paragraph: “I think the fit is mostly good and certainly interesting. I believe there will be a massive change in disposition about this team, and the days where it doesn’t seem to take too much to upset things around here should be mostly gone. McCarthy seems to feed off adversity as a coach, and his teams take on that personality. He wants doubts and enjoys the challenges that football always presents.”

We also talked in that piece about how quarterbacks have a knack for playing the best football of their careers under McCarthy. (Check.) And that he is one of the most aggressive fourth-down coaches in the business. (Check.)

The negatives in that piece were that McCarthy’s offense stopped evolving with modern times, which is where Kellen Moore likely comes in as a solution to something that even McCarthy conceded required fixing. And that he often was not willing to keep his foot on the gas when ahead in games and instead depended on defense to get stops — a defense just not good enough to get those stops.

Next, we started to get to the defensive situation that Dallas had on its hands in the spring of 2020. The defense was not awful, but it wasn’t in any way a fit for the complementary way a McCarthy team fits together. He has always wanted an aggressive defense to push an opponent into a feeling of desperation and that walks them into takeaways.

Much of defense is starting with a general philosophy and then following a decision tree down a certain path to fine-tune it. But, at the very start of the discussion, I think you have to mix your idealistic approach of how you see football with the pragmatic view of your talent. Once you have assessed that, you probably internally declare to your coaching staff the following view:

Are we an attacking defense or a conservative defense?

If you click on that link, you will notice I was trying to summarize where things would go under Mike Nolan, and most of the rest of it proved to be a hopeful projection that never materialized. Like Monte Kiffin before him, regardless of the rest of his respected resume of coaching excellence, he will always be remembered in Dallas as someone who did not get it right by any stretch of the imagination.

Back then, I put together a visual aid that is even more interesting now with 2021 data.

Here is what league rankings on blitz rates look like as McCarthy has switched addresses: 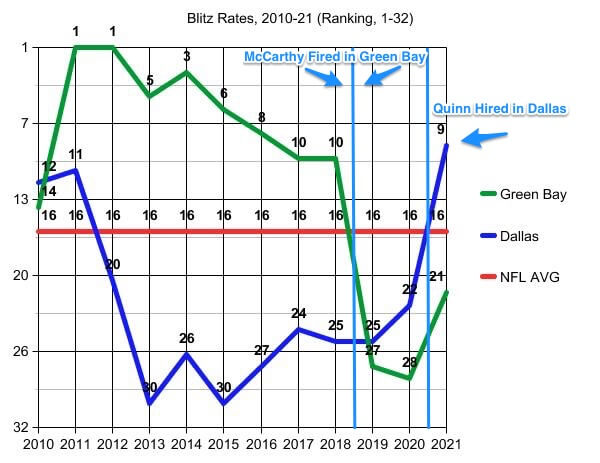 Look at that graphic and tell me you don’t see an interesting trend. McCarthy is in Green Bay and the Packers blitz. He leaves and it stops. He is not in Dallas and the Cowboys never blitz. He arrives and it shoots up to Green Bay levels. Either he is getting back to what works for him or we have a wild coincidence on our hands.
Back to that piece last year:

We should be skeptical of how much McCarthy ordered blitzes versus Dom Capers. But, you can see that the lines suggest that they are often well-above league average in their belief of how defenses should apply pressure in the name of aggressive defenses. McCarthy is never even close to the red line. His teams always brought pressure and also were always well above Dallas in takeaways. Interestingly enough, Green Bay dropped their blitz rate enormously without him (with the same defensive coordinator, Mike Pettine), and they experienced their best defensive season in years. Of course, they also added a boatload of defensive talent since McCarthy was fired, so I don’t know how relevant that shift in play-calling truly is.

But in Green Bay’s and Dallas’ defense (pun intended), it doesn’t mean much if you don’t have the right talent. That might explain the Green Bay defensive uptick (which also resulted in firing a coordinator last winter) and Dallas waiting until 2021 to fully be ready and able to unleash a more aggressive defense.

OK. Let’s try to tie this all together.

When McCarthy was in Green Bay, his defenses were never great. But they were often good at being aggressive and pushing the tempo of the game. Trying to steal a possession and making many opponents do things they don’t want to, to try to keep up with Aaron Rodgers. That just makes intuitive sense as we try to figure out why the 2018-19 Cowboys defense was trying to play conservative defense with an aggressive offense. It doesn’t make sense.

These rankings tell a story, but we should be cautious about what story they tell: 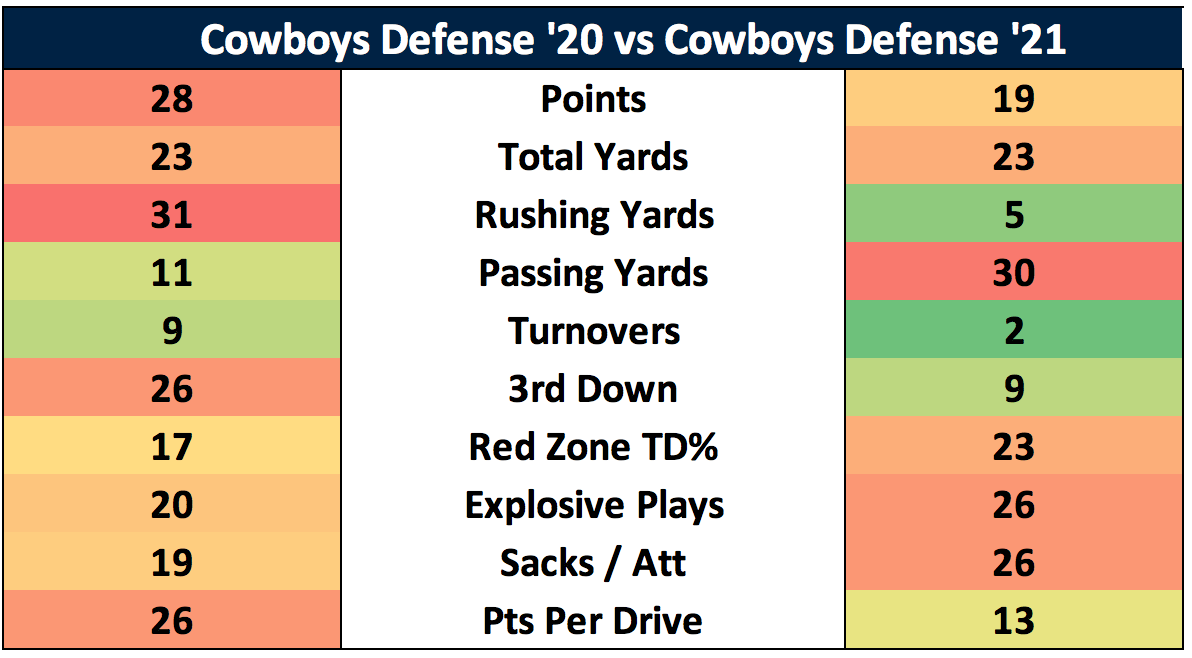 The Cowboys are better at turnovers, better at points per drive, better on third down. These are the emphasis points, along with red zone touchdown percentage and explosive plays. The others are important, but lesser so if we are focusing on “complementing a top-five offense.”

How do we try to measure that?

First, we point out how many blue names are on the Cowboys’ two-deep to represent brand-new defenders on the 2021 Dan Quinn defense that were not present in 2020 (let alone 2019): 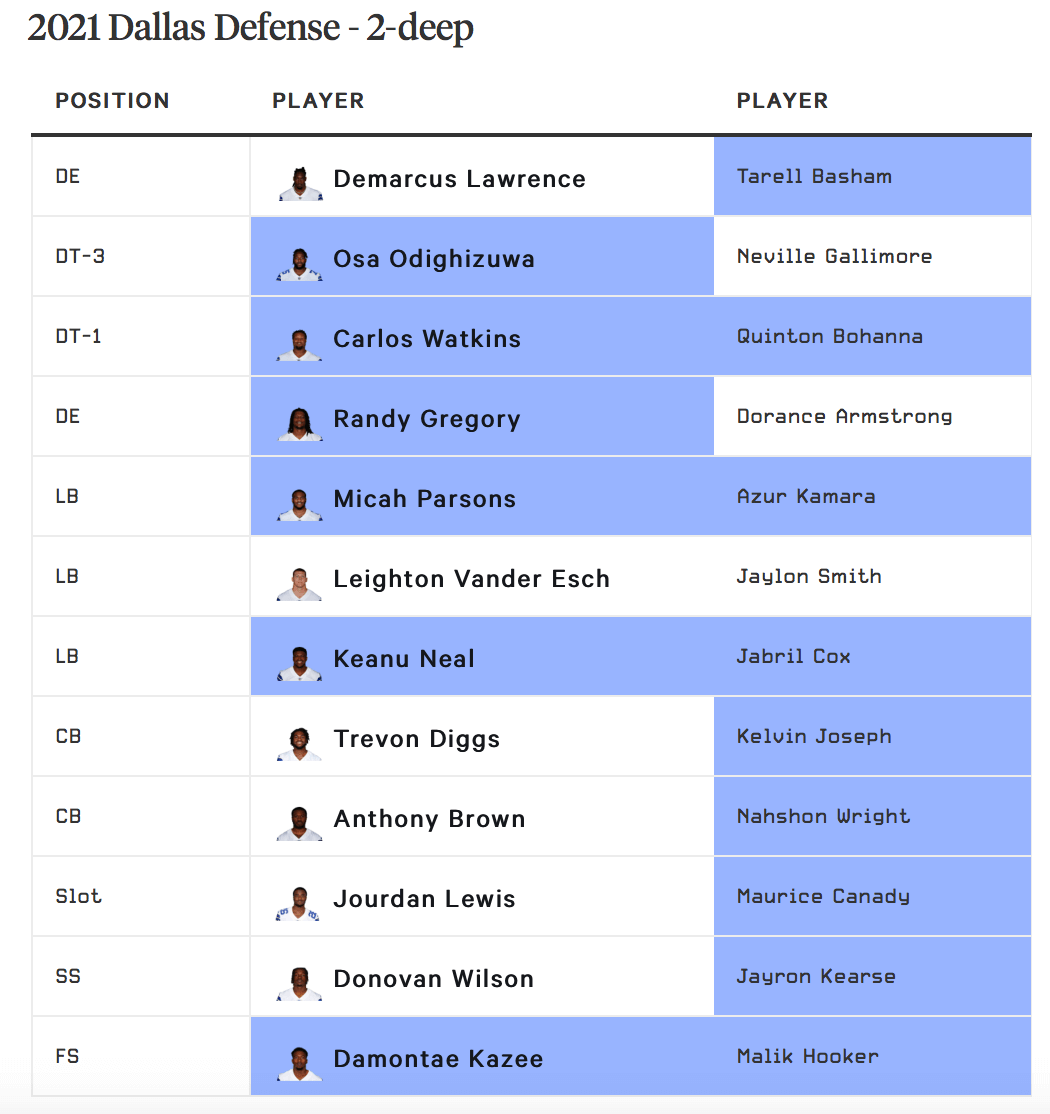 Please excuse Jaylon Smith being on the list, as we did it before Week 1. But the under-the-radar complete overhaul of the defensive personnel was well done. They don’t play like the 2020 defense because there are very few holdovers.

As the piece from back then indicates: Any time you add 15 new pieces to a lineup, you would have to concede that anyone saying they don’t see the changes, upgrades or the difference from last year must be watching some other team. These guys are different and that is a huge step.

How are the Cowboys employing those chess pieces? What coverages do the Cowboys call and what pressure rates are they using?

Let’s wrap it up with that.

First, let us eyeball the way this team blitzes:


Over the past three years, the Cowboys went from the 25th most pressures to the ninth most. What is interesting is they have always been decent at “getting home” with the blitz, but I guess they were nervous about doing it too much. Not anymore. On third down, the Cowboys are over 40 percent now, which makes sense because they are the second-best defense at getting results from a blitz. They are also 24th at getting pressure without sending at least five rushers. So unfortunately for the Cowboys, they still blitz out of necessity.

Perhaps the return of DeMarcus Lawrence will help “get there with four,” but for now they aren’t good at it.

And with blitzing always comes more man coverage. But you have to have the players to play man coverage, right? Trevon Diggs, come on down! Also, linebackers who can run really help, and safeties who can turn and cover. And it all helps because the coverage guys aren’t worried about run defense nearly as much (because the defensive front isn’t a sieve anymore).

Let’s look, then, at the coverages:


As you can see in the Cowboys’ two primary coverages over the past three years, the posture is much different. There are many variations of coverages and the Cowboys have run roughly 14 types in the database, but these are the two most general options. Cover 1 man and Cover 3 zones.

I am going to way oversimplify something extremely complex to make a point. If you want turnovers, you need pressure. If you want pressure, either you have great pass rushers or you generate it tactically. But if you try to generate it with swarms and numbers, then you give up safe coverages with a heavily populated secondary. When that happens, you have to have man-coverage defenders or at least trust them to do it enough.

For now, Quinn is striking that very good balance. We might feel differently if Minnesota sets Dallas on fire and you have to continue to mix coverages because NFL offenses are too good.

Hopefully, this all ties together. One thing about a global vision of a football team is it all makes sense together. You cannot be of two minds and hope to maximize your resources. If the offense sees the game one way but the defense is not designed to complement it, you are spinning your wheels. I submit that Wade Phillips and Garrett were great examples of coaches who could not get the two units on the same page and perhaps didn’t even value that approach enough to try.

However, as with all of his previous teams that were good, McCarthy appears to have that working here with his two coordinators basically coordinating approaches that fit together like a puzzle.