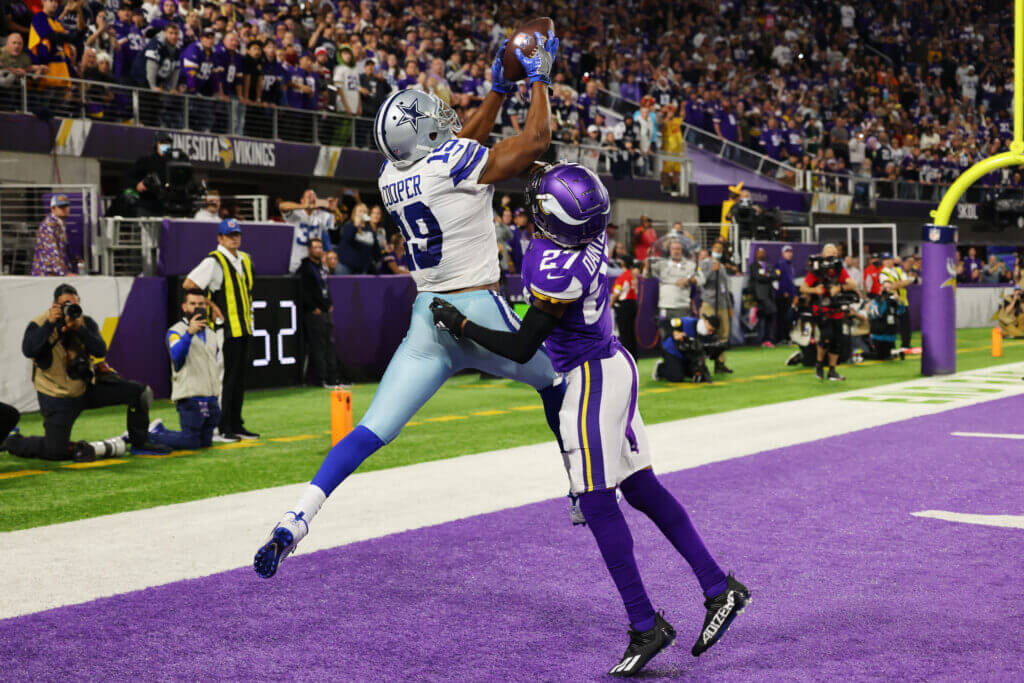 By Jon Machota 4h ago

MINNEAPOLIS — They had success running a similar play during training camp. With Dak Prescott nursing a strained throwing shoulder, backup quarterback Cooper Rush was working with the first-team offense. While closing out practice in team drills, Rush targeted wide receiver Amari Cooper on a fade route in the corner of the end zone with No. 1 cornerback Trevon Diggs in coverage. Rush put a precise pass where only Cooper could get it. Touchdown. Practice over.

The two connected on a similar play Sunday night at U.S. Bank Stadium. Only this time, it helped give the Cowboys their sixth consecutive win, a 20-16 come-from-behind victory over the Minnesota Vikings.

Cooper had been on the sideline for the previous two plays nursing a tight hamstring that had been bothering him earlier in the season. He attempted to get some quick relief by using a massage gun on the sideline. It did enough to get him back on the field for what ended up being the team’s final offensive play.

After the game, Cooper shared a story about what the huddle was like before his game-winning score. He said the play call was for double wide receivers to the left of the formation, meaning Cooper would be on the left with Cedrick Wilson next to him on the inside and CeeDee Lamb out far to the right.

“CeeDee wanted the ball really bad,” Cooper said. “So he told (Rush), ‘It’s double right, right?’ Because that would be me on the right side and him on the left. And (Rush) was like, ‘Nah, it’s double left, bro.’”

Lamb then asked Cooper if he wanted him to take the left side, probably because the ball was coming that way as long as there was no safety help, and Cooper had been dealing with the hamstring issue.

“That’s how much pride I take in wanting that ball in those pivotal moments,” Cooper said, “because I know I can go up and make a play. He tried to steal my touchdown, but I don’t blame him because he’s the same way as I am. He wants the ball in that situation. We want the ball in those important situations because we know we can win the game for the team.”


Rush and Cooper might not have had the opportunity to connect on the game’s most important play if it had not been for two other critical first downs picked up earlier in the drive. Cooper got things started when he hauled in a sensational juggling grab near the Vikings sideline that originally bounced off the shoulder of Minnesota cornerback Bashaud Breeland. The play gained 33 yards and set up Dallas at the Vikings’ 42.

The other key play came on third-and-11 on the Minnesota 20 when Rush dropped off a short pass to Ezekiel Elliott out of the backfield. If Elliott doesn’t get the needed yards, the Cowboys attempt to tie the game on a field goal. But Elliott saved one of his best plays of the season for a critical moment. The three-time Pro Bowler didn’t have much success on the ground, finishing with 50 yards on 16 carries. But he took this pass and made three defenders miss before dragging a fourth for what ended up being a 15-yard gain.

“We ran a triple-seam play, looking at taking a shot at the end zone,” Elliott said. “They covered that up, everyone got depth. Coop just threw the checkdown. After that, I just ran hard, and just got the first.”

Rush connected with Cooper for the game-winning touchdown on the next play. Rush, who had a shaky first half in his first career start, finished 24-of-40 passing for 325 yards, two touchdowns, one interception and a 92.2 passer rating. To compare, Vikings quarterback Kirk Cousins was 23 of 35 for 184 yards, one touchdown, no interceptions and an 88.3 rating.

“You definitely dream about” games like this, Rush said. “And it’s just as good as the dream.”

Rush took all of the first-team practice reps all week as Prescott continued to recover from a strained right calf. Since Rush knew there was a decent chance he’d start, several family members flew in for the game. His father was shown several times on NBC’s Sunday Night Football broadcast. At one point early in the final drive, his father could be seen repeating, “Be smart. Be smart. Be smart.” Cameras then caught his jubilation following the game-winning score and then after the game’s final play.

“Pretty special to see them out there,” Rush said. “My support system has been unbelievable my whole life. That’s the reason I’m here.”

Right before Rush made it inside the visitor’s locker room, Prescott ran up and the two embraced with a hug.

“It was obviously special,” Rush said. “Been there for a long time. A lot of games it was the other way around. He’s making plays at the end, and I get to watch those. It was fun for me to get a chance to go do it and have his full support.”


Wilson continued to impress in his expanded role with Michael Gallup working back from a calf injury. Wilson had two exceptional plays. One being the Cowboys’ first touchdown, a 73-yard strike from Rush down the middle of the field on the opening possession of the second half. The play was especially important because, at the time, it felt like Dallas had little chance of winning if not for multiple takeaways, some help on special teams and a dominant running game. That score seemed to bring added confidence to the offense.

Wilson later connected with Lamb for 35 yards on a double-pass from Rush. Wilson caught it on the left of the formation and then rolled back right, throwing on the run. Dallas added a field goal on that possession, making it 13-13 to start the fourth quarter.

“Cedrick Wilson is a hell of a football player,” Cowboys coach Mike McCarthy said. “I can’t say enough about him. He can play all the (wide receiver) positions and special teams. He’s outstanding.”

Defensively, the Cowboys were led by rookie linebacker Micah Parsons, who had a game-high 11 tackles, including a game-high four tackles for loss. Despite losing the turnover battle 2-0 and allowing the Vikings to go 75 yards on seven plays on the game’s opening series to take a 7-0 lead, Dallas just found ways to get off the field.
The Vikings ended up 1 of 13 on third-down conversions. They also went four-or-less plays on seven of their 12 possessions.

“You got to take a lot of pride in that,” Parsons said of the way the defense fought through adversity. “Bend but don’t break. A lot of penalties didn’t go our way, a lot of calls, momentum wasn’t in our favor, but never one time did we put our heads down. I think you look at the New England game and you look at the game prior, every game we just get stronger and stronger. We’re all trusting each other. Bend but don’t break mentality.”


Improving to 6-1, especially without Prescott, should only further the belief that the Cowboys are serious contenders for the overall top seed in the NFC playoffs. Currently, the Packers, Cardinals and Rams are all ahead of them at 7-1. Dallas’ next three games are against the Broncos (4-4), the Falcons (3-4) and Chiefs (3-4).

No one is suggesting that the Patriots or Vikings are Super Bowl contenders, but the way the Cowboys fought through adversity in consecutive road wins over those two teams says a lot about where this young team is at and what it could achieve.

“This was definitely a gut-check win for us,” McCarthy said. “Excellent win for us tonight. We knew it was going to be tough coming in here. Always is. I’m proud of our football team.”

Injury updates: Cooper didn’t seem overly concerned about his hamstring injury. Gallup should be able to return this week, so the Cowboys would be in good shape at wide receiver even if the medical staff believes Cooper needs to take some time off.

Left tackle Tyron Smith suffered a setback to his already sprained left ankle. He left the game and did not play in the second half. Ty Nsekhe filled in at left tackle. If Smith ends up missing time, it will be interesting to see if the Cowboys potentially give La’el Collins some work at the position. He worked at right tackle and left guard last week in practice.

Rookie linebacker Jabril Cox suffered what appeared to be a significant right knee injury. He was carted off and did not return. The team called it a sprain after the game.
Diggs injured his right ankle on the game’s final series. He left the game with a noticeable limp and did not return. It was a good sign that he did not have a limp or need crutches or a walking boot while making his way to the team bus after the game.

Prescott warmed up before the game, but the Cowboys ultimately decided it was best to keep him out another week. Is playing next Sunday against the Broncos still a possibility for him?

“For sure,” Prescott said. “I was getting prepared to play this game. I’m a guy that takes it day-by-day, moment-by-moment. And right now, I’m going to celebrate this win with the guys and worry about rehabbing and getting everything back in order tomorrow.”


Interesting note: Vikings head coach Mike Zimmer said after the game that they had “a lot” of film of Rush, in case he was going to be the starter. He mentioned last week that they had information going back to his time at Central Michigan. But former Cowboys safety Xavier Woods, who had an interception and a forced fumble Sunday night, said they prepared all week only for Prescott.

“We felt like they were going to run the same offense either way,” Woods said. “We prepared for (No. 4) all week. We didn’t get the news until pregame. We watched a couple of clips of Cooper. But we just prepared for (Prescott).”