Sturm: Decoding Kellen Moore - Third down the difference-maker in a disappointing loss

Sunday night’s loss to the Rams is still not sitting well with most.

As we look back at the performance of the offense like we do every week, it is clear that we should always start with the biggest issue. I think that is pretty basic analysis, and it ensures we coldly look at a body of work without deluding ourselves about how a bad call from a referee, a bad decision by a coach or a bad break with an injury or a tipped pass can be blamed for everything.

We rationalize things in life when emotions are high. We justify a Pay Per View movie on our TV being priced at $30 as “cheaper than going to the movies with the whole family,” which is true but also several times more than we have ever paid to watch a movie on a couch. (Not that this isn’t a true story or anything from last weekend when Mulan seemed like a good plan.)

So before we blame this or that or Aaron Donald, let’s just look at third downs.

The Cowboys have been fantastic on third down for the entirety of the Dak Prescott era. In four seasons and one week, the Cowboys rank fourth of 32 teams on third downs. 77 percent of those third downs have been pass plays. They have been consistently outstanding, and while we should be pleased about that, we should also recognize that this is very likely why they lost a game on Sunday when a lot went well and they never turned the ball over.

The Cowboys were certainly not money on the money down and that killed almost every single second-half drive they had.

After great successes in the first half, when Dallas had 14 first downs, two touchdowns and missed a field goal, the second half featured six drives with very few chain movements (10 first downs) and just three points. If they had seven points, they probably win.

Third down means so much in this league. Not everything, because skipping third down is even better than converting it, but it is worth noting that Kansas City and Baltimore were the best two teams on third down last year and both had great seasons. Dallas was third, and we have talked at length about how red-zone TD%, defense and especially special teams killed them.

But so did third downs in certain games.

Below, thanks to our buddies at ProFootballReference.com, you can find the 12 games in which Dallas, with Dak, has had at least 10 third-down attempts and less than a 30-percent conversion rate. On Sunday, it was 3-of-12 — 25 percent — which keeps alive a streak of six straight games in which Dallas was below 30 percent and lost.

That’s only happened three times since the Amari Cooper trade, which makes it tempting to call it a random fluke. But can we?

Look at the three games when the team’s had the most difficult approach:

These are the stiffest defensive tests, I suppose, which fuels people who believe Dallas can’t handle these huge national audience games against great defensive coaching and game-wreckers. A collective 8-of-39 on third downs for 21 percent conversion rate is beyond bad. It would be the worst in the league by a pretty good margin.
Let’s take a peek at the full reel here.


I see a fair amount of blitz pressure, and I definitely see the Rams attacking the soft spots of the offensive line. We have to understand that the general idea of offense is to attack, yes, but also not to let game-wreckers wreck your game. It certainly takes a football genius to find a new center, a left guard who has never been up to NFL levels of quality and a right tackle nobody had ever seen play at the NFL level — nor had any idea he ever would — and dominate the opposing front four.

Ultimately, the offense did a nice job of avoiding sacks and disasters (see Philadelphia at Washington), but the results were also a loss.

Here is the third-down passing map for Prescott on Sunday. It shows very little adventure or risk, which I assume was a directive of Kellen Moore and Mike McCarthy to get the ball out very quickly and not be afraid to throw it short of the sticks. After all, punts are not the worst thing — sacks and fumbles are.


Still, this chart is very poor. 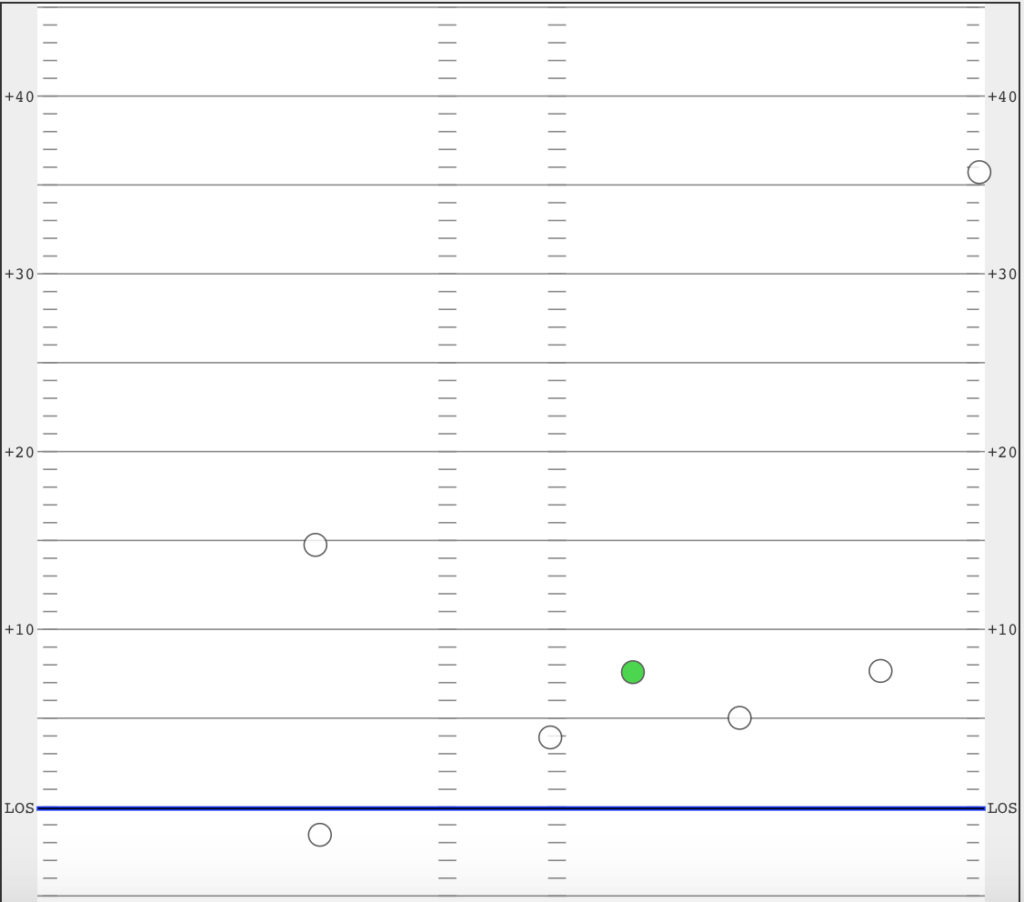 The lone green dot was to Dalton Schultz, which was a very strong moment in the third quarter. Otherwise, there was nothing to feel good about. The only other first downs achieved on third down were run by Prescott and Elliott.

Simply put, the Cowboys must find their three wide receivers with better regularity. It starts up front, but if teams sniff this out as a way to limit the weapons, then pressure will become a weekly occurrence. 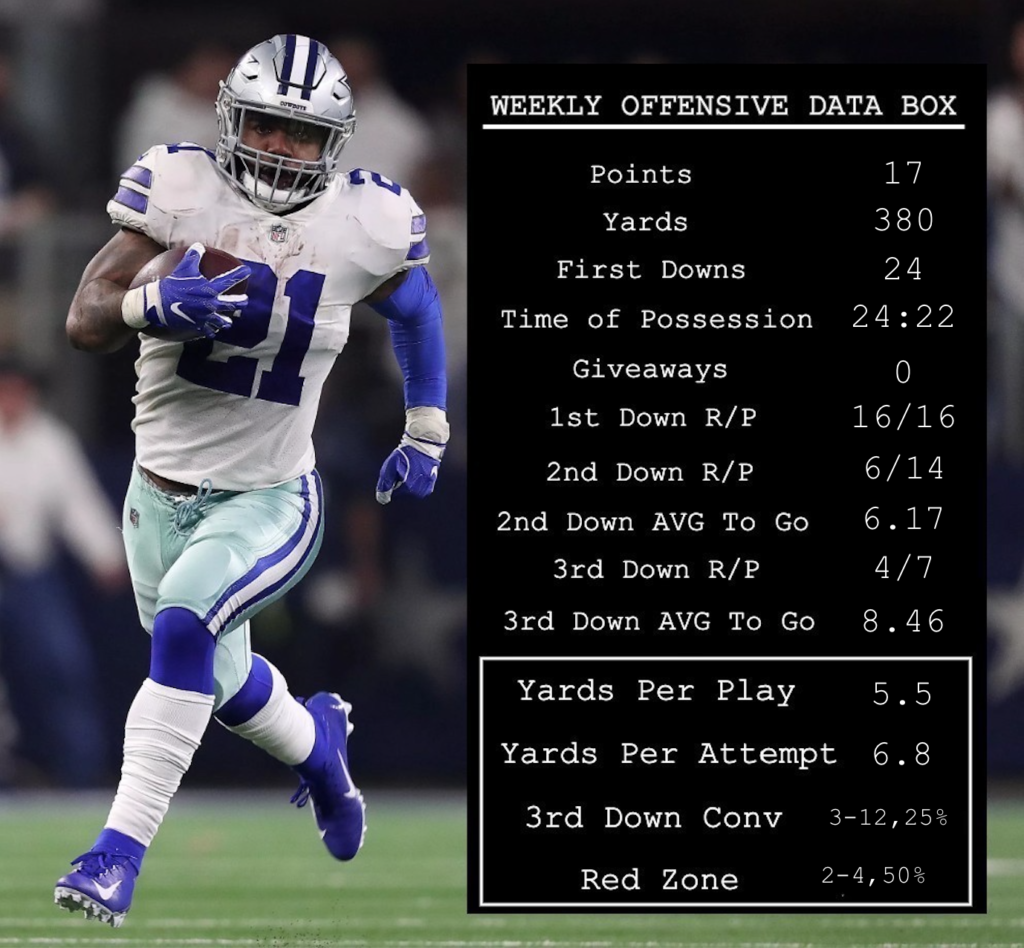 Here are the weekly metrics we track. As you can see, there is a lot to look at. Depending on the week, I will pick something different and relevant to that particular week. But third down will quite clearly get our attention this week.

SUCCESS RATES BY DOWN

There is no shortage of Cowboys analysis out there, and many of my colleagues have been a bit alarmed about the first-down runs and the somewhat disappointing amount of first-down passes. Well, I don’t think I feel as strongly about that. Clearly, we all want more passing. But the running game does a great job of keeping a defense on guard, providing an offensive line the ability to fire forward as a changeup, and most importantly, Dallas is good at running the ball.


If you are hitting 72 percent success on first down, you are doing very well. What is success?


Again, very good — save for third downs. There are good things from Sunday amid the bad.

If you read last week’s piece, you are ready for this data. If not, maybe you should. Bottom line: The Dallas offense was going to be simple this year in regards to personnel and with Blake Jarwin getting hurt, maybe even more so. 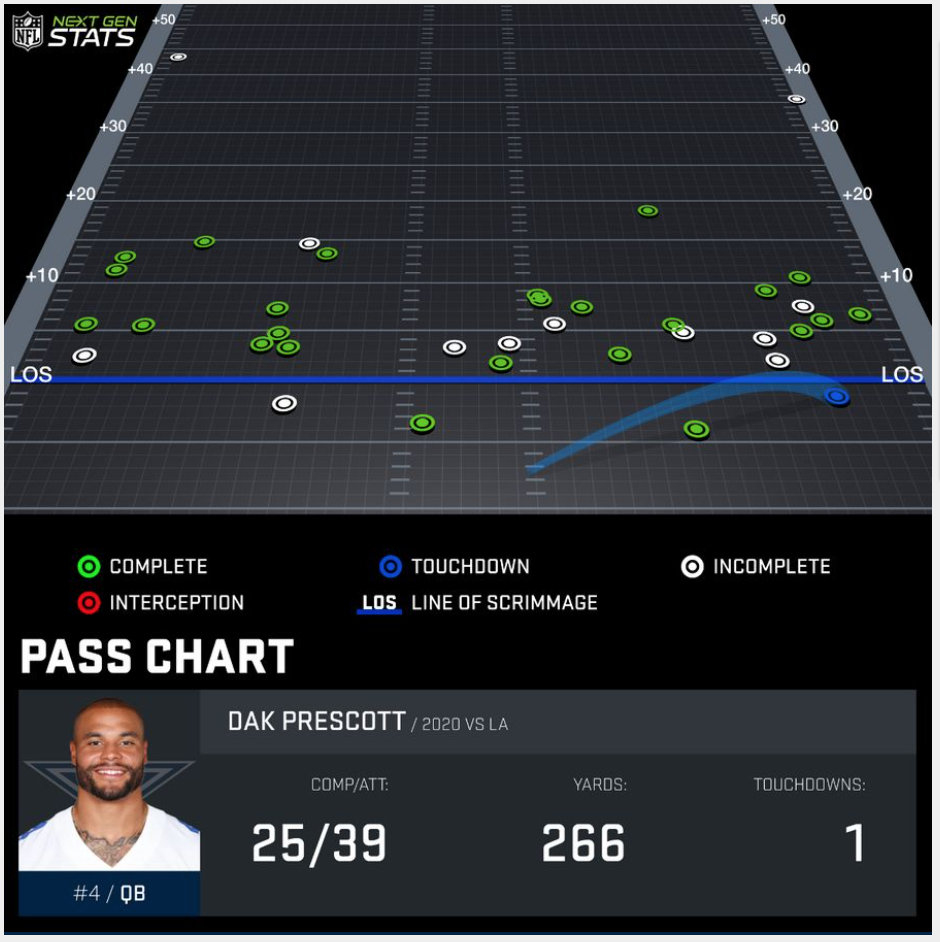 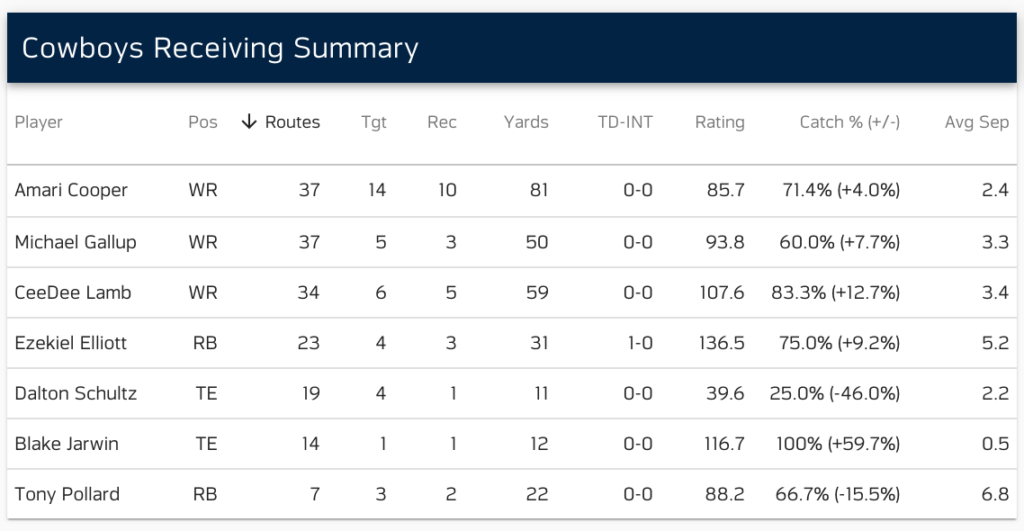 There is a lot of data in these numbers that I won’t cover every week, but I do want you to have it available here on Tuesdays. I’m most interested in catch percentage and probability numbers. You can see Schultz’s drops caused him to drastically underperform, but overall, imagine what that Gallup catch over the top would have done to the numbers. These guys are going to be great.

Finally, I want to make sure you know about play-action. One of my colleagues was upset at how little the Cowboys used play-action on Sunday. Well, I will remind everyone of an important thing: Just one QB — Josh Allen in Buffalo, who appears to be in a full play-action offense — passed for more PA yards this week than Dak’s 125.

So you may think they should run it much, much more, but relative to the league they had the second-most yards in Week 1.


Ultimately, my biggest takeaway is that Aaron Donald versus the Cowboys OL and trying to start your season without La’el Collins was a problem. It made third downs an exercise in self-preservation and not in execution. That said, the offense battled hard, and if it wasn’t for that great play on fourth down or that iffy pass interference Jalen Ramsey drew, the outcome might be wildly different.

I covered both of those plays in yesterday’s Morning After so I will let them go today. Review here.

Make adjustments and get home to play the Falcons, who were worked over pretty hard by Seattle.

To cap things off: I’m going to make a point of interacting with you, the reader, more than ever in these comment sections. So feel free to drop your questions and observations and I’ll do my best to respond.