Machota: What we’ve seen from Cowboys’ Everson Griffen & how he can make immediate impact 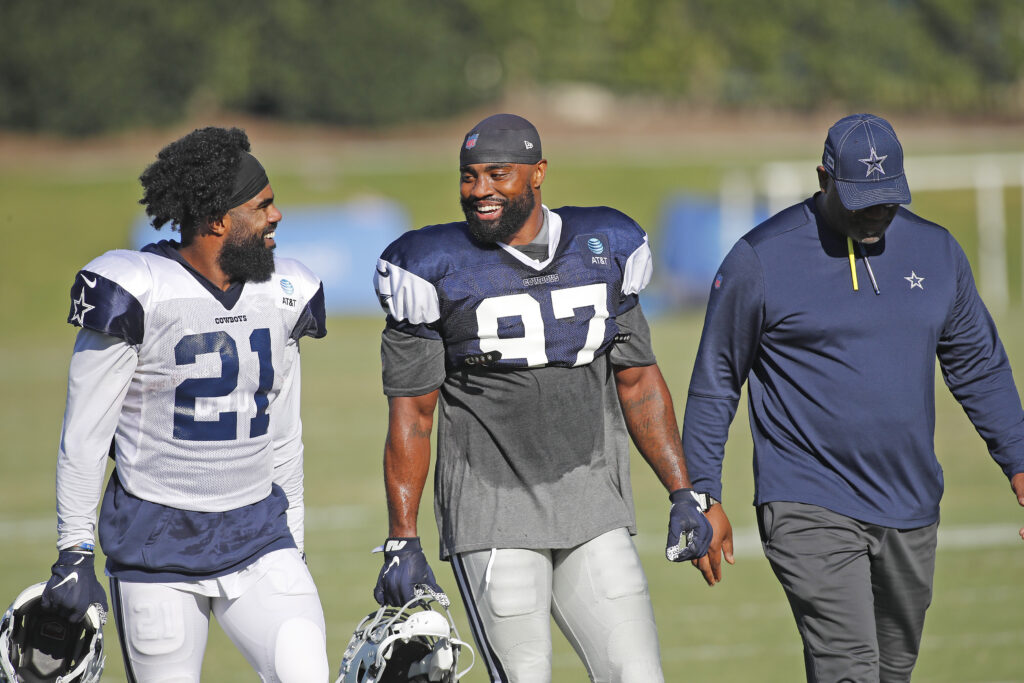 By Jon Machota 2h ago

FRISCO, Texas — As reporters were ushered into the Ford Center Sunday morning, three Cowboys players were going through a series of drills near the end zone closest to the entrance of the indoor stadium.

DeMarcus Lawrence, Aldon Smith and Everson Griffen were working on pass-rushing moves. Sunday marked the first day Griffen worked into team drills since signing a one-year, $6 million contract with the Cowboys two weeks ago. It’s not too difficult to find Griffen. Either look for the player who seems to be having the most fun or just search for the bright royal blue Nike cleats.

“I’m trying to win a championship,” Griffen said. “I look at the pieces we’ve got … the weapons are in place … On the defensive side, we’re stacked.”


Griffen, 32, has been in pads at practice before Sunday, but he was limited to some individual drills and mostly strength and conditioning exercises as the Cowboys gradually increased his workload. The expectation now is that he will immediately provide pass-rush help in a variety of ways, especially coming off the right edge.

The four-time Pro Bowler spent the last 10 seasons with the Minnesota Vikings, where he faced Cowboys coach Mike McCarthy’s Packers teams 18 times in the regular season and once in the playoffs.

“I can’t say enough about Everson Griffen,” McCarthy said. “Just the fact of being able to compete against him twice a year, he was always the primary focus for us offensively, going up against him. He’s a relentless player. He brings it every down, has great passion for the game. He’s a big personality, so I think he’s going to be a great fit for our football team.”

A key factor in Dallas acquiring Griffen was his relationship with George Edwards, the Vikings’ defensive coordinator the last six seasons and now a senior defensive assistant with the Cowboys.

Griffen (6-3, 273) has gotten after opposing quarterbacks with a variety of pass-rushing moves, totaling 74.5 career sacks and 176 quarterback hits. He had eight sacks, 24 QB hits and 11 tackles for loss in 15 games last season.

During a Dec. 2017 interview with WCCO-TV CBS in Minnesota, Griffen explained that he only uses three basic pass-rushing moves: a stab (with his inside hand), power (two hands to push the offensive tackle back) and a spin move that he sets up with an outside rush and then spins back to the inside.

“Off that, I have other moves, but those are the three I use the most to set them up for anything else I want to do,” Griffen said. “The thing I focus on the most is my get-off. If I can get off the ball before they can move, and I can get one step in before they can get one kick-step back, it’s over. I can win every time. I own them then. That’s all I need is three rushes, and then a counter.”


Griffen still appears to have plenty of gas left in the tank to get to opposing quarterbacks alone, but the combination of him, Lawrence and Smith is what most intrigues the Cowboys. That trio has combined for 161 sacks and 348 QB hits in their careers. If Dallas’ defense significantly improves this season, those three will be among the biggest reasons.

New defensive coordinator Mike Nolan is already showing signs in the first seven training camp practices of how much more multiple this group will be up front. Under the previous staff, the majority of the pass rush came from the four down linemen. In the new scheme, the edge rushers will play 4-3 and 3-4 roles, potentially rushing the passer from a three-point stance on one play and then standing up to rush and sometimes dropping into coverage on the next. The goal is to disguise what they’re doing so things are more difficult for opposing quarterbacks to diagnose pre-snap. The pressure could come from Lawrence or Griffen or Smith off the edges or perhaps from one side of the line while a blitzing linebacker or safety comes from the other.

And then there are the snaps where Nolan gets Lawrence, Smith and Griffen coming after the quarterback together, most likely in passing situations. Those three have enough versatility to cause problems rushing from the outside on first and second down and then kicking inside on third down, if needed.

“They’re going to make a lot of plays, and they’re already doing it.”

To get a better understanding of what kind of player the Cowboys are getting in Griffen, here are some highlights of NFL players and coaches talking about him.

Cowboys defensive coordinator Mike Nolan: “I’m very excited about Everson being here. I watched him from afar as many people have and he’s a very good player. He’s a playmaker. He’s a very well-prepared player for the game. He’s a pro. Naturally, any time you get a veteran that carries himself as a pro in his preparation, it helps our younger players. So you get more out of it than just his individual play. You get how he rubs off on the younger guys. But like I said, his play speaks for itself. He’s been very productive and a very good NFL player, and we’re certainly excited to have him to strengthen our defensive line.”

Cowboys defensive line coach Jim Tomsula: “You look at Everson’s tape over the years, a guy I did a lot of work on coming out of college, he obviously is a heck of a football player. His motor jumps out at you off the screen.”

Cowboys right guard Zack Martin: “We’ve played against him several times in my career and every time we play him he’s a guy that we circle in the gameplan. He can disrupt games.”

Vikings coach Mike Zimmer last Oct. via The Minneapolis Star Tribune: “He’s playing excellent, maybe as good as I’ve seen him play since he’s been here. What makes Everson really, really good is his effort that he plays with, the violence that he plays with, and he’s going to make it a full-day affair for that offensive tackle he’s going against. We’re asking him to do some things that really defensive ends don’t want to do, and he goes in there and does them.”

Former Packers and current Bengals defensive tackle Mike Daniels in an NFL Network Top 100 players interview in 2017: “It’s like an explosion. As soon as the ball is snapped, it’s like a bomb went off. He’s just flying around the edge. And he’s going to get to that quarterback. That’s a big dude, too, if you’ve ever seen him in person. I watch a lot of film on the Vikings, they’re in our division. And he just makes offensive tackles look goofy sometimes.”

Vikings safety and former Griffen teammate Harrison Smith in a 2017 NFL Top 100 players interview: “Everson is that guy that’s all go all the time. He’s always getting into it with people. That’s what makes him so great. I saw one of the times he was mic’d up, he was almost talking trash, but there was no profanity or anything bad. He was just so excited to talk about what he was doing on the field and the next move he was going to make. That’s exactly who he is.”

Eagles right tackle Lane Johnson in a 2018 NFL Top 100 players interview: “Crazy first step. There are a lot of people who can rush a passer, but his get-off, especially in Minnesota on that turf, it’s not even fair. He’s relentless. He’s good at bending the edge and then whenever the tackle basically has it made then he’ll pop it back with a spin. He’s a man-child.”

Packers left tackle David Bakhtiari to Packers.com near the end of the 2016 season: “I tip my hat off to (Griffen). He’s a hell of a player. He competes, whatever the score is, I’m going to get his best game out of him for 60 minutes. He deserves all the accolades he’s had. I’ve always said if you want to be the best you got to beat the best, so I always enjoy competing against a guy (like that) at a high level.”

Iamtdg said:
"On the defensive side, we’re stacked."
Click to expand...

On the defensive side?

Iamtdg said:
He’s a very well-prepared player for the game. He’s a pro. Naturally, any time you get a veteran that carries himself as a pro in his preparation, it helps our younger players. So you get more out of it than just his individual play. You get how he rubs off on the younger guys.
Click to expand...

And this is the caveat with Earl Thomas.

Genghis Khan said:
On the defensive side?
Click to expand...

a little bravado I think. at least we're not having to listen to all that 'Hot Boys' shit any longer.

p1_ said:
a little bravado I think. at least we're not having to listen to all that 'Hot Boys' shit any longer.
Click to expand...