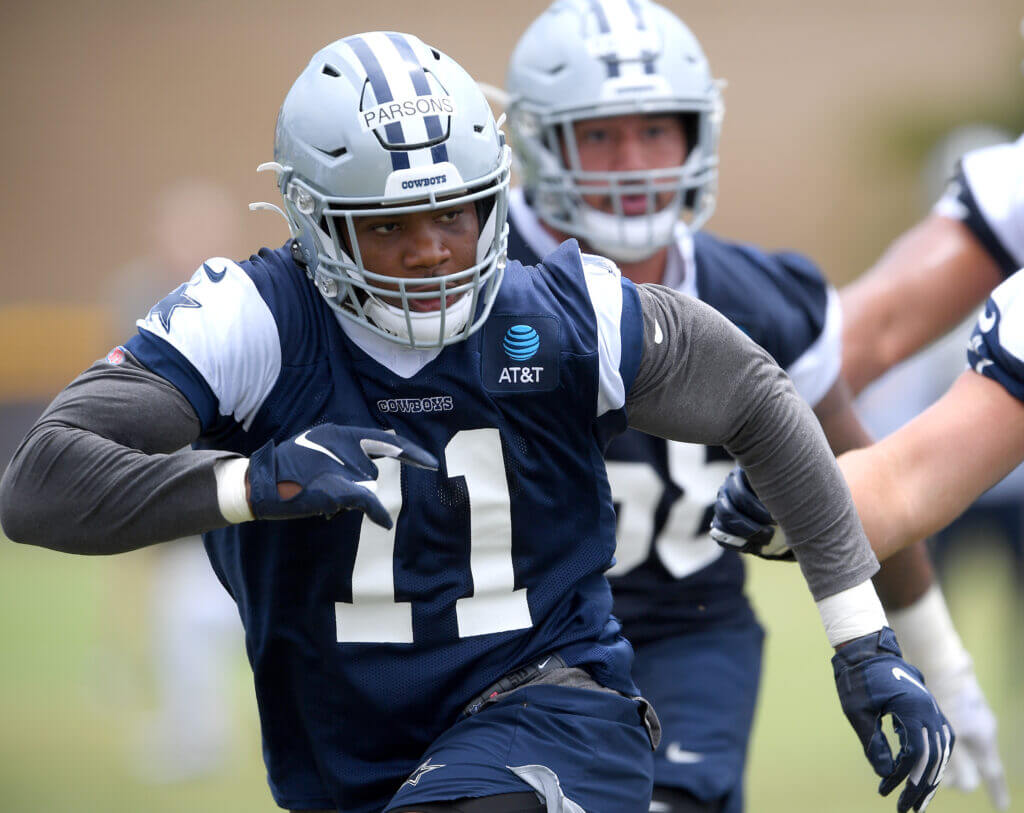 By Jon Machota 3h ago

The Cowboys have 35 days remaining before they must have their 90-man roster trimmed to 53. Training camp is only three practices old, but we have a little better idea of what that final 53 might look like if they can avoid any significant injuries.

We used those numbers as a template in our way-too-early projection back in May and we’re using it again here.

As much as Mike McCarthy would probably like to keep three quarterbacks, with the third being Ben DiNucci, it’s going to be difficult with all of their needs in other areas. Prescott is obviously the starter and Gilbert has separated himself as the backup. Unless the Cowboys add a veteran free agent from another team to compete for the backup job, these are the two you should expect to see on the active roster during the season. If Prescott can avoid missing any games, as he did during his first four seasons in the league, the other spots won’t matter anyway. And if he was to miss significant time again, the final record would likely be similar to last year, regardless of the backup.

These are the three the Cowboys kept last year. No reason to think they would make any changes. Elliott and Pollard are healthy, and both are expected to get almost all of the running back touches. Dowdle, an undrafted rookie last season out of South Carolina, has the lead at the No. 3 spot. Next up on the depth chart would be fullback Sewo Olonilua. If Elliott or Pollard were to suffer a significant injury, the Cowboys would probably consider adding a veteran either via trade or after other teams trim their rosters.

The first three are completely set. Cooper has started camp on the physically unable to perform list, but Jerry Jones expects him to return to practice after the team returns to Dallas following the second preseason game. Cooper (ankle) was moving well while working on the resistance cords at the end of Sunday’s practice. The other five have all looked pretty good to start camp. The dark horse to keep an eye on who is not listed above is Malik Turner. He’s been impressive when given opportunities with the first team.

Schultz has been very good to start camp. Jarwin has made some plays as well, looking healthy after suffering a season-ending knee injury in the 2020 season opener. Jarwin and Schultz give the Cowboys two quality starters at the position. Sprinkle is more of a blocking tight end. He played in 59 games, starting 33, for Washington over the last four seasons. His top competition is Sean McKeon, who played in 14 games last year as an undrafted rookie free agent, mostly contributing on special teams. The Cowboys could keep all four, but that extra spot could end up being needed more on the offensive or defensive lines.

Williams has been getting a lot of reps as the backup center to start camp. He’s still expected to start at left guard with Biadasz starting at center, but it appears the plan is to have Williams get extra center work in case Biadasz has to come out of the game or miss extended time. Williams could then move to center and McGovern could take over at left guard. Nsekhe will be the veteran swing tackle. Ball and Knight can be the reserve tackles. Knight has also been getting some work at guard in camp, giving him valuable position flex after starting nine games last season at left tackle. For me, the final spot came down to Farniok, an interior player, and Terence Steele, who started 14 games at tackle because of the injuries to Smith and Collins. Farniok got the edge because this group needs more depth at center and guard. Smith, Collins, Nsekhe, Ball and Knight should be enough to handle the two tackle spots.

Eleven might end up being one too many, but almost all of the 16 defensive linemen on the 90-man roster have some argument here. Trysten Hill isn’t included because there’s a decent chance that he starts the season on PUP. Of the players who have started camp on PUP, McCarthy said Hill is the furthest away from returning to practice. Much like during the Rod Marinelli days, this group is expected to rotate in a lot of players. If they’re going to go heavy at one position group, this one would make as much sense as any.

Francis Bernard would be the next man up if they were to keep six. Through the first few practices, Parsons, Smith and Vander Esch appear headed for the most playing time. New defensive coordinator Dan Quinn seems to be very interested in getting all three on the field together often. And Parsons is expected to play more than just linebacker in Quinn’s scheme. He’ll be rushing the passer from several different spots. Neal and Cox will have to be able to contribute on special teams, an area that could keep Bernard on the roster. He played 220 special teams snaps during his rookie season. 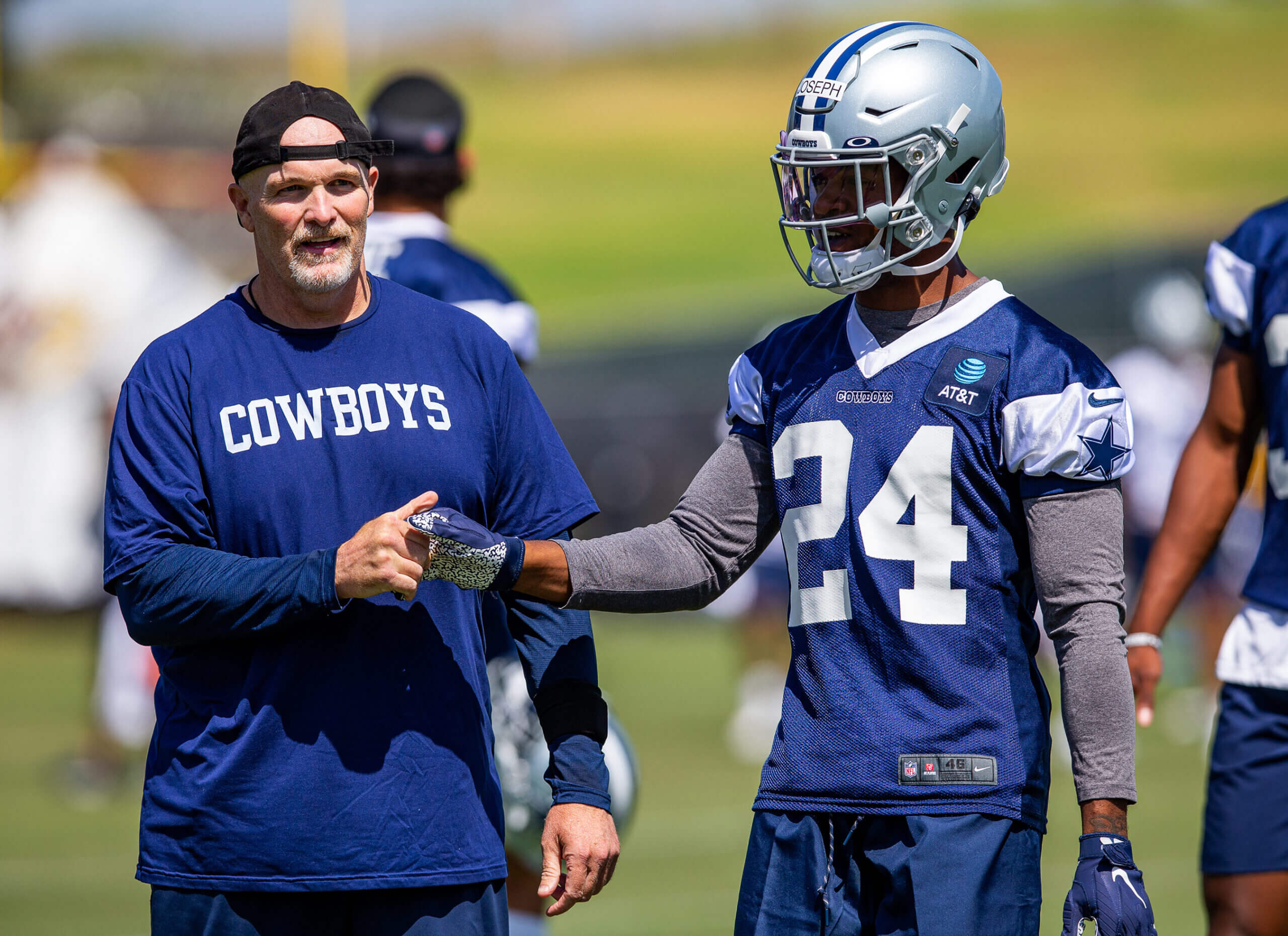 Things have changed with the expected addition of Malik Hooker. The final two safety spots came down to Hooker, Kearse and Darian Thompson. It really shouldn’t come as a huge surprise if any combination of those three make the 53-man roster. If Hooker is healthy, he’s locked into a roster spot. He has the most potential to be a defensive playmaker. The final safety spot could come down to whoever John Fassel thinks can help most on special teams, Kearse, Thompson or possibly even rookie Israel Mukuamu. Reggie Robinson II, a fourth-round pick last year, and veteran Maurice Canady were left off, but both have a chance if they can beat out Wright. Diggs, Joseph, Lewis and Brown appear to be locked into the top four CB spots. Goodwin is one of Dallas’ most valuable special teams contributors.

Zuerlein is the only kicker on the roster. McQuaide is the only long snapper. The punting job will come down to Anger and Hunter Niswander, but Anger gets the edge because Fassel has said he’s the favorite. With Zuerlein opening camp on PUP because of an offseason back surgery, there hasn’t been the normal field goal work we’d usually see up to this point. “No doubt, with his experience,” Fassel said last week of Zuerlein, “he’ll be ready for Week 1.” Niswander is handling kicking duties in practice with Zuerlein out.

I mean he did look better last year. I'm still not a big fan of the guy. I'd rather go young with a guy that has some upside as a WR but the Cowboys seem to value Brown for his blocking and special teams. I don't know if he is really great at those things but I'll defer to someone who pays more attention to WR's blocking and kick coverage.

Glad Simi at least also made it. Bigger, faster and I'm sure he could be good at special teams and blocking too. Honestly if I keep 6 guys I think I'd give a shot to one of the undrafted FA WR's we got. Maybe the Texas Tech kid or the Iowa kid. I'll have to see preseason to see how ready they really are for the NFL.

Brown is a matchup play. We don't have a guy with his combination of body type and blocking skills.

I've always liked him and felt they should have taken better advantage of and further developed his ability to block out defenders with his body.

Noah Brown's greatest vulnerability is his salary (compared to the younger guys).

ravidubey said:
Brown is a matchup play. We don't have a guy with his combination of body type and blocking skills.

I've always liked him and felt they should have taken better advantage of and further developed his ability to block out defenders with his body.
Click to expand...

Thanks for your commentary, Jason.

boozeman said:
Thanks for your commentary, Jason.
Click to expand...

boozeman said:
Thanks for your commentary, Jason.
Click to expand...

That’s just it, Jason’s gone and they are still keeping and using Brown. So there’s gotta be something there right? You’re just worried Brown might get Fehoko cut.

ravidubey said:
That’s just it, Jason’s gone and they are still keeping and using Brown. So there’s gotta be something there right? You’re just worried Brown might get Fehoko cut.
Click to expand...

No worried about Fehoko getting cut. If Brown beats him out with level competition, so be it.

If it's even remotely close, I'd flush every Garrett player and replace him with the newer guy.

Fortunately, like ZC said, the money factor for Stephen will help that happen.

Oh, and pads come on today for the first time. Let's start to get a read on what the big boys on defense can do.

Brown is a good blocker and ST'er, which is basically your stereotypical end of roster WR. I'm fine with that, what I'm not fine with are the random games where he gets like 7 targets because the guy is never going to be a legitimate weapon on offense besides a handful of plays here and there where you can utilize his blocking ability.

We don’t have other receivers like that, so I’m ok he’s just a possession guy. Sometimes possession is more critical than explosive production.

ravidubey said:
We don’t have other receivers like that, so I’m ok he’s just a possession guy. Sometimes possession is more critical than explosive production.
Click to expand...

Wait. Weren't you the guy a week or so ago that was arguing AGAINST catch numbers, saying yards were more important?

Maybe I'm misremembering, thinking of somebody else. That's quite possible.

NoDak said:
Wait. Weren't you the guy a week or so ago that was arguing AGAINST catch numbers, saying yards were more important?

Maybe I'm misremembering, thinking of somebody else. That's quite possible.
Click to expand...

Yeah that was me.

NoDak said:
Wait. Weren't you the guy a week or so ago that was arguing AGAINST catch numbers, saying yards were more important?

Maybe I'm misremembering, thinking of somebody else. That's quite possible.
Click to expand...

I'm only talking situational football, not accumulated stats which really don't mean a lot to me.

When Baltimore was stifling us, this guy gave us some favorable matchups. He's a role player that can keep us in position to win games, even though in that one Baltimore eventually pulled away (especially once their starting QB came back)
You must log in or register to reply here.
Share:
Facebook Twitter Reddit Pinterest Tumblr WhatsApp Email Link
Top Bottom