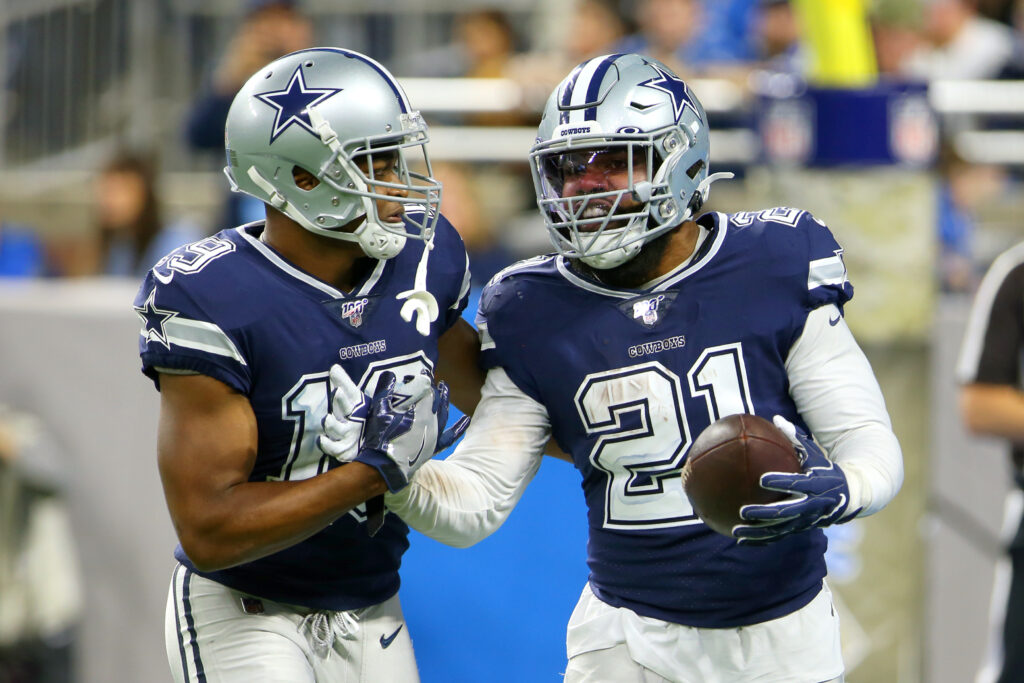 By Jon Machota 3h ago

The Cowboys open their season Sunday night against the Los Angeles Rams. Not long ago, it seemed uncertain the season would start on time or even happen because of the impact of the coronavirus. Now, it’s imminent.

To get you ready, here is a 2020 Dallas Cowboys season preview.

The biggest changes are taking place on defense. The 4-3 front that generated the majority of pass rush under previous defensive coordinator Rod Marinelli has been replaced by a more multiple look under Nolan. Training camp practices revealed edge rushers standing up and dropping into coverage in some 3-4 looks as well as showcasing their pass-rushing ability in three-point stances in 4-3 looks. The back end is less predictable as well. The goal is to keep opposing quarterbacks guessing more often, increasing the number of turnovers. The biggest loss on that side of the ball was No. 1 cornerback Byron Jones signing a five-year, $82.5 million contract with the Miami Dolphins in March. The biggest additions have been veteran edge rushers Aldon Smith and Everson Griffen. They are replacing Robert Quinn, who led the team in sacks (11.5) in 2019 and signed a five-year, $70 million deal with the Chicago Bears in March.

What’s not? The offense has lost a few pieces and added a few others, but keeping Moore at OC meant there wouldn’t be significant changes to an offense that led the league in yards per game (431.5) and was sixth in points (27.1) last season. Although McCarthy has called offensive plays for almost all of his head coaching career, he has allowed Moore to keep the keys to the car. The goal has been to build off what they established last year with Dak Prescott, Ezekiel Elliott, Amari Cooper, Michael Gallup and one of the league’s best offensive lines. The offense has the potential among the league’s best, but it must produce better results late in close games and perform better on the road. The biggest loss on that side of the ball was the retirement of Pro Bowl center Travis Frederick. Joe Looney is stepping into that role, where he started every game two years ago. The biggest addition is Lamb, who will be used primarily in the slot but has the ability to play every wide receiver position.

What I’m watching: How will this team start the season? McCarthy is a proven head coach, guiding the Green Bay Packers to a Super Bowl victory at AT&T Stadium in Feb. 2011. His Packers teams prevented the Cowboys’ two best teams of the last decade (2014 and 2016) from advancing past the divisional round of the playoffs. The roster is loaded with talent. Both Dak Prescott and Ezekiel Elliott have said it’s the best roster they’ve been on. But due to the COVID-19 pandemic, McCarthy didn’t get a typical offseason to implement his changes. There were no minicamps or organized team activities. He also didn’t get a normal training camp schedule or preseason games. To prevent injury, the Cowboys did not tackle to the ground in training camp. The first time they will be live tackling is in their season opener. All of the above means some rust should be expected early on.

Pandemic impact: The Cowboys had three players opt out because of the coronavirus pandemic: CB Maurice Canady, FB Jamize Olawale and WR Stephen Guidry. Ezekiel Elliott was diagnosed with the coronavirus in June. The three-time Pro Bowl running back said he took a month off from workouts to make sure there wasn’t any extra wear and tear on his heart or lungs.

Although most teams won’t be having fans in the stands to at least start the season, Cowboys owner Jerry Jones has said all along that a limited number of fans would be able to attend Cowboys home games at AT&T Stadium. Jones has not revealed the final number of fans who will be allowed inside. Dallas’ first home game is Sep. 20 against the Atlanta Falcons.

Rookie watch: All eyes are on CeeDee Lamb. He exceeded expectations during training camp as he was used in a variety of ways. The Cowboys didn’t use the 17th overall pick on the former Oklahoma standout wide receiver to slowly integrate him into the offense. He’ll be heavily involved from the start of the season, catching passes from the slot, working on the outside at times, carrying the ball on jet sweeps and reverses and returning punts.

“My confidence is (through) the roof with him,” Prescott said of Lamb. “When he came in, I had high expectations for him because of the guy that I initially met in the offseason when we were throwing and when we were getting together. You could just tell the type of guy he is, the type of player, the type of competitor he is. So my expectations for him rose immediately from that meeting. To get into training camp, to see what he’s done, to see what he can do, I think he’s had as good of a camp as anyone has, any position on this team. It’s exciting. He’s going to play a huge role in our success, not only this year but in the future. I’m excited for it, excited for him.” 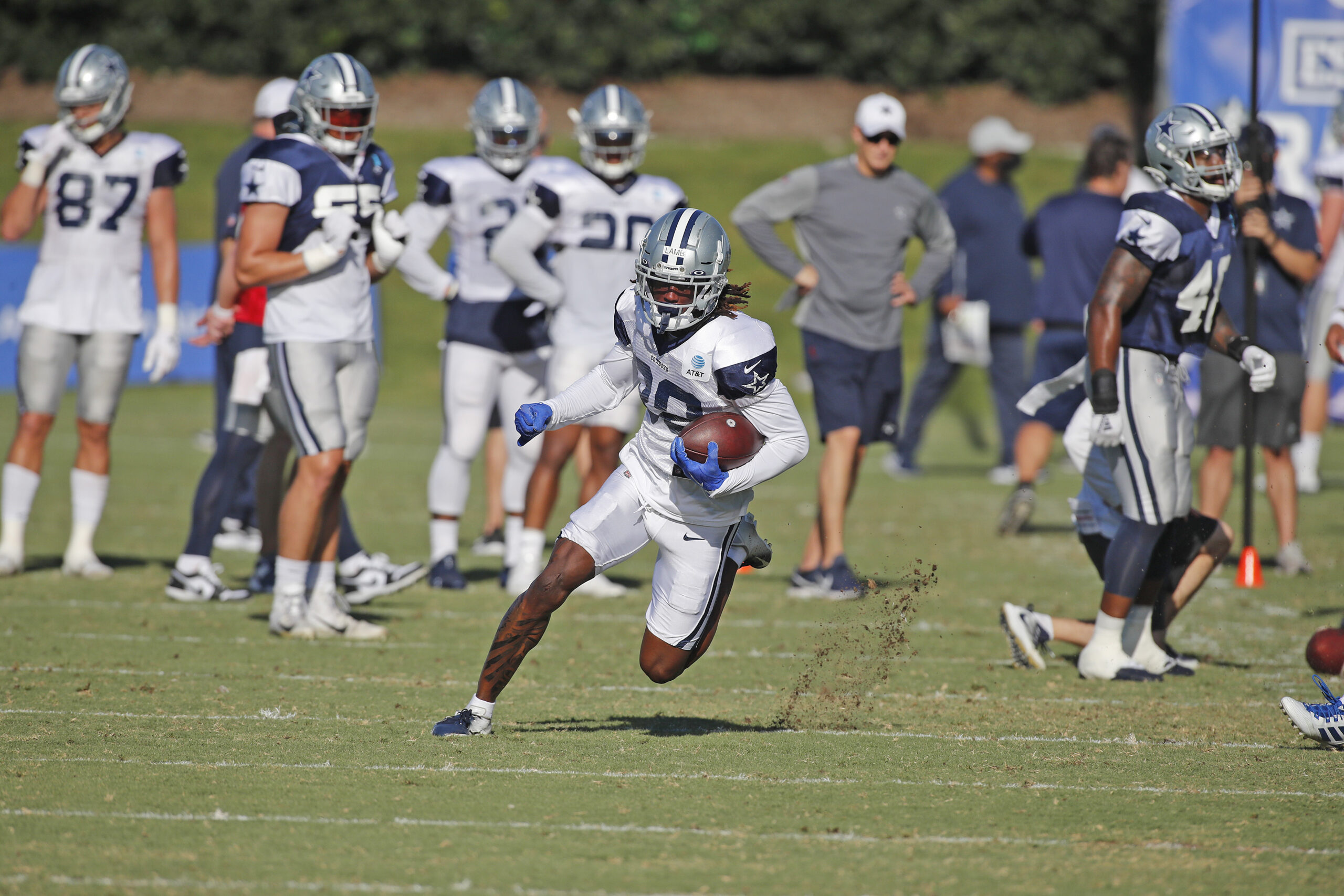 Second-round pick Trevon Diggs is a cornerback many projected to be drafted in the first round. He steadily improved throughout camp, going from rarely noticed the first few days to arguably the team’s biggest standout in the secondary. Even if he doesn’t start Week 1, look for Diggs to be a major contributor this season, potentially even leading the team in interceptions.

“He’s a great player,” Prescott said. “Very athletic. When the ball’s in the air, it’s just as much his as it is the receiver’s. That’s something that jumps off immediately when you watch tape or when you’re just out there throwing against him. He’s a special player. He has all the talent in the world. Huge competitor. He’s always talking to me after practice about what I’m looking for, what can he do to get better. When you have a guy like that on your team, it makes you happy that he cares, he cares that much and you know he’s going to do his job.”

Schedule/must-watch game: It’s certainly not an easy start to the season, playing at the Los Angeles Rams, at home against the Atlanta Falcons, at the Seattle Seahawks and then back home against the Cleveland Browns. The back half of the schedule will determine the Cowboys’ playoff hopes. Following a Week 10 bye, they travel to Minnesota and Baltimore and host Washington in an 11-day stretch. In Weeks 15 and 16 they host the Eagles and defending NFC champion 49ers.


Must-watch game: Dec. 27 vs. the Philadelphia Eagles at AT&T Stadium. The NFC East again looks like it will come down to the Cowboys and Eagles. The division was basically decided last year at Philadelphia in Week 16. The same thing could happen again this year, only this time the Week 16 game will be played in Arlington, Texas.

Pass rush: There was a time this summer when the pass rusher opposite of DeMarcus Lawrence was a huge question for the Cowboys. The answer has been Aldon Smith and Everson Griffen. Both certainly looked the part of quality edge rushers throughout training camp. Then the Cowboys recently learned that they will be getting Randy Gregory back from suspension in Week 7. Mike Nolan has some very nice pieces to move around and make life difficult on opposing quarterbacks.

Turnovers: The Cowboys will need that extra pressure up front, because the defensive backs remain the team’s biggest question mark. Chidobe Awuzie, Jourdan Lewis, Anthony Brown, Xavier Woods and Darian Thompson are the veterans on the back end. None of them have had more than two interceptions in a season. If Nolan’s disguised defense doesn’t lead to more takeaways, the Cowboys might be forced to win a lot of shootouts.

Play-calling: Kellen Moore has the job, but could that change if things don’t go well to start the season? Mike McCarthy has a long history of calling plays. He was brought in to take this team to the next level, which is a conference title game and Super Bowl. McCarthy has said he’s going out of his way to make sure Moore doesn’t feel like McCarthy is stepping on his toes. That’s fine for right now. The Cowboys haven’t lost a game. But will that change if the offense gets stagnant and a few losses start to pile up?

Offensive line health: La’el Collins is starting the year on the three-week injured reserve because of a hip issue. Tyron Smith has missed three games each of the last four seasons because of injury. The Cowboys need both of their standout offensive tackles for this offense to be elite. There have been problems in the past when they’ve had to rely on backup tackles. The health of Collins and Smith could determine if the Cowboys set themselves up to make a Super Bowl run or miss the playoffs completely.

Running game: Things will be different under McCarthy. Ezekiel Elliott’s carries might come down while his touches stay the same. Elliott has worked this offseason on becoming a better receiver. There are going to be more looks with Elliott and Tony Pollard in the backfield together. It will be interesting to see how effective the running game will be under these changes. Instead of bringing in an extra tight end and fullback to establish the run, look for the Cowboys to use 11 personnel most of the time. This forced defenses to decide if they want to load the box to stop Elliott, allowing single coverage on receiving weapons like Amari Cooper, Michael Gallup, CeeDee Lamb and Blake Jarwin on the perimeter, or space things out to defend Dallas’ receivers and leave five- or six-man boxes for Elliott to take advantage of.

Record prediction: 10-6 with losses coming at Seattle, at home against the Cardinals, at Philadelphia, at Minnesota, at Baltimore and at home to the 49ers. But 10 wins will be enough to win the NFC East for the fourth time in the last seven years.

I think judgement will be rendered on postseason results, and entry to playoffs is pretty much assumed.

Other teams have had similar preparation handicaps though. We can’t assume teams like the Falcons and Seahawks will have a huge edge because of continuity. The energy a new good coach brings in makes a huge difference, especially to teams with this much talent in place.

It’s going to come down to talent, attrition, coaching quality, and a little luck. Surprise. Fortunately Dallas has two of the three before the season starts for the first time since 1993.

Stay healthy and it’s three out of four. Get lucky, and I see us right there at the end.

Dallas more often faded down the stretch (with 2018 the obvious oddball year) because the coaching stopped improving the team throughout the season.