Machota: 15 predictions for the Cowboys - Pro Bowl picks and win total for the second half of the season 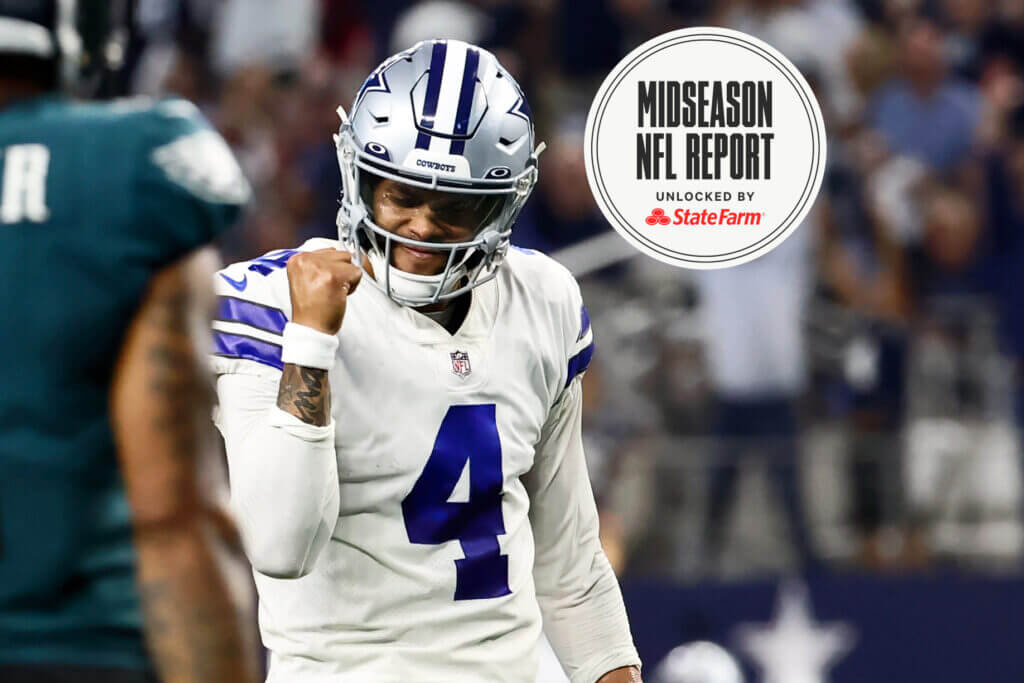 By Jon Machota 2h ago

Editor’s note: This story is part of The Athletic‘s Midseason NFL Report, which is unlocked by State Farm.

If you follow sports, you probably know the Dallas Cowboys are having a good season. Even if you didn’t care or want to know, you likely have an idea. The Cowboys have won six games in a row and are 6-1. Comparisons to previous outstanding Cowboys teams are being made, which naturally leads to Super Bowl predictions.

We’re not making any Super Bowl predictions just yet, but we do have several other predictions to pass along as the Cowboys firmly sit atop the NFC East standings, 3 1/2 games ahead of the second-place Philadelphia Eagles.

Here are 15 for the remainder of the season.

1. Dak Prescott will be fourth in MVP voting behind Arizona’s Kyler Murray, Buffalo’s Josh Allen and Los Angeles’ Matthew Stafford. Prescott will finish the season with 4,500 passing yards and a career-high 40 touchdown passes.

2. Micah Parsons will win Defensive Rookie of the Year. This certainly isn’t a bold prediction. He was named NFC Defensive Player of the Week on Wednesday after leading the Cowboys with 11 tackles and four tackles for loss at Minnesota. Parsons is a significant favorite for Rookie of the Year. According to BetMGM, he is +115 to win with Odafe Oweh, Parsons’ former Penn State teammate and current Ravens pass rusher, in second place at +800.

3. Trevon Diggs will not win Defensive Player of the Year, but he will finish with an NFL-best 11 interceptions. That would be the most by an NFL player in a single season since Everson Walls had 11 for the Cowboys in 1981. Diggs will end up finishing second in the voting behind Cleveland’s Myles Garrett, who is on pace for 22 sacks. The unofficial NFL record for sacks in a season is 23 by Al “Bubba” Baker in 1978. The official NFL record holder is Michael Strahan with 22 1/2 in 2001.

4. Ezekiel Elliott will end up with 1,300 rushing yards and 12 rushing touchdowns. Elliott is on pace for 1,387 yards, but I think he potentially sits out a game to rest late in the season. Tony Pollard could also see a little more work if head coach Mike McCarthy is looking to reduce the wear on Elliott entering the playoffs.

5. CeeDee Lamb will lead the Cowboys in receiving yards with 1,400 and receiving touchdowns with 12. Amari Cooper is coming off an outstanding game against the Vikings, but he has been playing through several injuries, with his tweaked hamstring causing issues late Sunday night. Like Elliott, there’s a decent chance McCarthy looks to give Cooper rest down the stretch.

6. Greg Zuerlein will remain the Cowboys’ kicker all season. Some would like to see the team try other kicking options, but McCarthy and special-teams coordinator John Fassel seem committed to sticking with Zuerlein. His field goal percentage is 77.8, 22nd in the NFL among kickers with at least 10 attempts. Zuerlein is 9-of-10 from 30-to-39 yards, 3-of-4 from 40-to-49 yards and 1-of-3 from 50-plus. He is also 91.3 percent (21-of-23) on his extra points. That ranks 24th in the league among kickers with at least 10 attempts. His biggest kick this season is a 56-yard game-winner against the Los Angeles Chargers as time expired in Week 2.

7. Randy Gregory will lead the team in sacks with 15 and make his first Pro Bowl. With five sacks in the past four games, Gregory is on pace for 13 this season. He entered the year with 10 1/2 in his career. The return of DeMarcus Lawrence in a few weeks should help create more problems up front for opposing offensive lines. Gregory could be the biggest beneficiary.

8. The Cowboys will have nine players make the Pro Bowl. The predictions are Prescott, Elliott, Lamb, Gregory, Parsons, Diggs, TE Dalton Schultz, RG Zack Martin and punter Bryan Anger. Cooper is in consideration, but it’s difficult to see the Cowboys getting two wide receivers with so many outstanding players at the position. Each Pro Bowl team usually has six wide receivers. Those six for the NFC could end up being Lamb, Cooper Kupp, Deebo Samuel, Davante Adams, DK Metcalf and Mike Evans.

9. The Cowboys will lead the NFL in total offense and scoring offense. Dallas leads the league at 455 yards per game and is third at 32 points per game. As long as Prescott doesn’t have any lingering issues with his recent calf strain, the Cowboys should continue to be elite in all areas on offense.

10. Defensively, the Cowboys will finish Top 15 in total defense and scoring defense, but not Top 10. Dallas is 19th in total defense at 366 yards per game. The Cowboys can get that into the 350-range. They are 16th in scoring defense at 23 points per game. It’s pretty wild to think they could have that type of turnaround in one offseason. A lot of talk heading into the season was about how the Cowboys just needed to get the defense to be middle of the pack to complement their loaded offense. Well, they’ve certainly done that through the first seven games.

13. Anthony Brown will start every game. That might not seem like a big deal now, considering Brown has started the first seven games, but that wasn’t always the expectation. Heading into training camp, Brown was expected to compete with second-round pick Kelvin Joseph for that No. 2 corner spot opposite Diggs. Joseph injured his groin at the end of the preseason and Brown hasn’t given the coaching staff any reason to go in another direction.

14. La’el Collins will start at three positions this season. Collins has already started at right tackle. That’s his natural starting spot. But since Terence Steele has performed so well at the position, Collins recently got work at left guard. With Smith dealing with a lingering left ankle issue, that could open up an opportunity for Collins to potentially start at left tackle. The Cowboys would like to get their starting five solidified up front, but injuries and ineffective play could make that difficult.

15. The Cowboys will finish the regular season 13-4 and earn the third seed in the NFC playoffs behind the Cardinals and Buccaneers. The toughest games remaining are on the road against the Chiefs and Saints and at home against the Raiders and Cardinals. There are also three NFC East road games in the final five weeks of the season. It’s possible that Dallas ends up 14-3 or even 15-2, but 13-4 is more likely.

Iamtdg said:
15. The Cowboys will finish the regular season 13-4 and earn the third seed in the NFC playoffs behind the Cardinals and Buccaneers. The toughest games remaining are on the road against the Chiefs and Saints and at home against the Raiders and Cardinals. There are also three NFC East road games in the final five weeks of the season. It’s possible that Dallas ends up 14-3 or even 15-2, but 13-4 is more likely.
Click to expand...

I think it's more likely we finish behind the Rams than Cardinals, especially with Murray gimpy.

As an aside, Tyron is making the Pro Bowl too unless he misses like 5 games or something.

17thgame is stupid. You know they’re going to make it 18 games, so should’ve just done it now.

Simpleton said:
I think it's more likely we finish behind the Rams than Cardinals, especially with Murray gimpy.

As an aside, Tyron is making the Pro Bowl too unless he misses like 5 games or something.
Click to expand...

Yeah I think the Cards fade down the stretch. It's going to be Bucs, Rams, Cowboys and Packers.

They really really want to kill this sport.

Shiningstar said:
They really really want to kill this sport.
Click to expand...

boozeman said:
It has gotten really perverted now with the influence of gambling and the out of control officiating
Click to expand...