Machota: ‘I mean, he’s intense’ - Dak Prescott showed signs even before kickoff that the Cowboys were in for big day 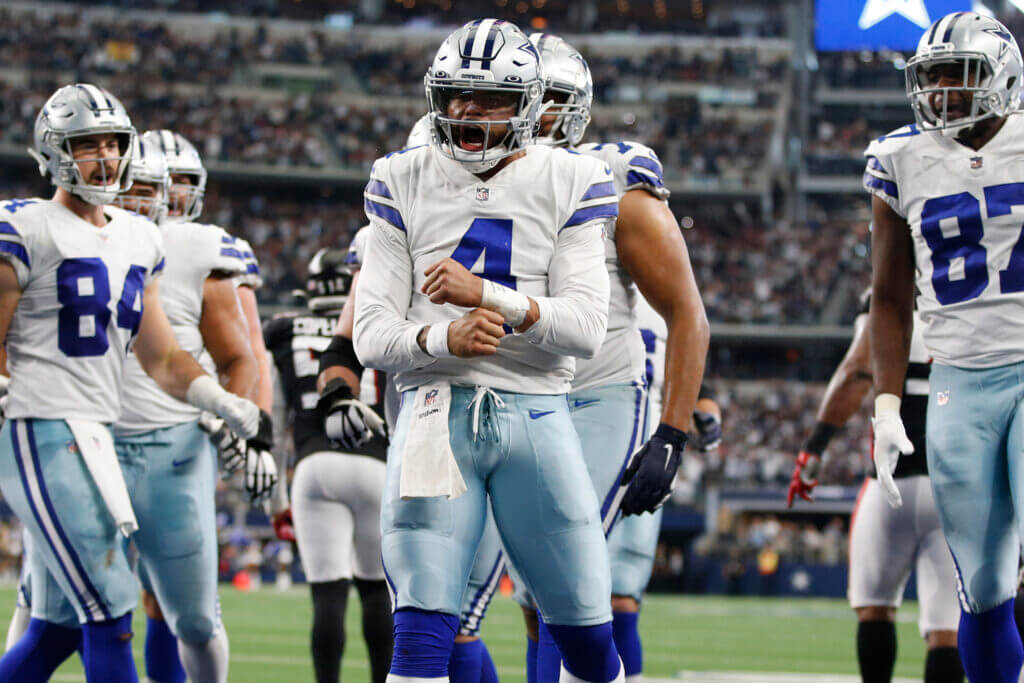 ARLINGTON, Texas — The Cowboys’ entire team always huddles before heading back into the locker room after pregame warmups. It usually takes place about 30 minutes before kickoff.

One player stands in the middle and delivers a message to the group. A fired-up Dak Prescott handled those duties before Sunday’s 43-3 blowout of the Atlanta Falcons at AT&T Stadium.

“I felt some type of way about not doing it last week,” the Cowboys quarterback said, “so I wanted to make sure I just got back to it. I think that’s something you’ll continue to see me do throughout the season. Just another chance for me to talk to obviously the offense that I talk to a lot, but the whole team, the defense and the special teams. Maybe guys that don’t hear from me often. Just to tell them what I’m thinking, tell them what we need to do as a team.

“We needed to rebound and we needed to respond. Whether I use a couple of (expletives) or not, that’s just the emotion and the passion that I have for this game.”


“I mean, he’s intense,” Cowboys running back Ezekiel Elliott said of Prescott’s pregame demeanor. “He’s going to come out ready to go. I think he definitely wanted this week a little bit more after what happened to us last week. Dak is our leader, we go as he goes. We did our job today.”

Early in the season, former Cowboys linebacker Jaylon Smith handled those pregame duties. Since Smith’s release, Prescott and safety Jayron Kearse have taken over. Prescott handled it before the Patriots game in Week 6. Kearse took over the past two games.

Prescott was clearly eager to put last week’s performance behind him. He had one of his worst games in Dallas’ stunning 30-16 loss to the Denver Broncos. He never looked comfortable as he completed only 19 of his 39 pass attempts.

He came out firing against Atlanta. Dallas won the coin toss and chose to receive. Prescott then completed 3 of 5 passes for 51 yards, including a 13-yard touchdown to CeeDee Lamb in the left corner of the end zone on third-and-6. The Falcons answered with a field goal. Dallas would then go on three more touchdown drives in the first half, and add a fifth touchdown on a blocked punt in the final minute of the second quarter. The Cowboys’ 29 second-quarter points are the most scored in a quarter in franchise history.

Prescott was 18-of-23 passing for 219 yards, two touchdowns, no interceptions and a 135.3 passer rating in the first half alone. He threw for 232 yards in four quarters last week, positing a 73.9 passer rating. His 127.9 passer rating Sunday is the 10th highest of his career.

“We’re a resilient team,” Prescott said. “A team that is very aware of what we’re capable of. Last week just wasn’t us. And everybody in that locker room knows that. It left a bad taste in our mouth. I think it was taste that we needed, to understand how tough this game is. But tonight just shows that when we focus in, take it one play at a time, and our minds are where our feet are, we’re capable of doing some great things.”

The Cowboys’ 7-2 record keeps them in the thick of the race for the NFC’s top playoff seed. Only Green Bay (8-2) and Arizona (8-2) have better records.

Prescott wasn’t pleased with his footwork last week, his first game back after suffering a right calf strain in Week 6. Getting things back on track in that area was his focus in practice last week. He said Sunday he could tell in pregame warmups he was feeling like his old self.

He was feeling so good he even turned in a signature Prescott 4-yard touchdown run late in the third quarter, lowering his shoulder at the goal line on fourth-and-2.
“I mean, I had to re-establish some toughness,” he said.

Prescott had a noticeable scratch under his right eye after the game. But it wasn’t from the physical run. It was given to him by Lamb as the two celebrated on the Cowboys sideline after Prescott’s second touchdown pass of the first half, a beautiful teardrop toss he floated to beat a quickly approaching pass rush.

“I come off the field, put my helmet down,” Prescott said. “And then I see CeeDee coming past me, so I give him a hug and tell him good job. I guess he thought I had my helmet on, so he leaned in for a helmet tap. Face mask to cheek. I’m all right.

“The hardest hit (I took Sunday) was CeeDee on the sidelines.”

Of course, the Cowboys didn’t win just because Prescott played well. Cornerback Jourdan Lewis made several key stops in the first half to put an end to some decent Atlanta drives. All three starting corners, Lewis, Anthony Brown and Trevon Diggs each had an interception.

Offensively, Elliott had two rushing touchdowns, and the wide receiver trio of Lamb, Amari Cooper and Michael Gallup looked as dangerous as the team was expecting entering the season. It was Gallup’s first game back since suffering a calf strain in the season opener.

But everything starts with the offense. This year’s defense seems to feed off of how the other side of the ball is playing. And everything on offense begins with Prescott. If he’s playing well, the Cowboys are capable of winning it all. Blowing out Atlanta might not be that impressive to some, but the Falcons entered Sunday’s game as the seventh seed in the NFC playoffs. Any kind of win would’ve likely been enough to get the taste of the Denver loss out of their mouths. But a dominant performance like the Cowboys put on display shows last week was indeed an outlier.

“I think you hear it, but it’s very true,” Cowboys owner Jerry Jones said after the game. “If you’ve got a quarterback, someone in his position, that can take the bad and then respond with good and throw the other out, then that’s one of the most important qualities of what we ask him to do, is do better when he has a bad run of it. And that was a picture book today of how to do that.