This seemed like a good idea at the time.

I want to see the Cowboys come out as an angry team Sunday. Too often they act like a finesse team. Come out, punch someone in the fucking mouth. It’s the playoffs!

UncleMilti said:
Gotta be honest, the 49ers are talking a bit too much IMO.
Click to expand...

It will be that much more delicious when we kick their fucking ass.

Who cares? He is useless for the most part.

This seemed like a good idea at the time.

I don’t care. Just thought it was news.

UncleMilti said:
I don’t care. Just thought it was news.
Click to expand...

Oh, I wasn't implying you did.

Not a loss IMO. Get Gifford out there. He was active in his limited snaps against the Eagles.
Click to expand...

I am used to thinking of myself as one of the youngest in this group. I was 15 when we won our last Superbowl. It is strangely ironic that neither team has been good at the same time since 1998.

Ok, I’m officially getting tired of him calling himself a lion.

Sheik said:
Ok, I’m officially getting tired of him calling himself a lion.
Click to expand...

shoop said:
I am used to thinking of myself as one of the youngest in this group. I was 15 when we won our last Superbowl. It is strangely ironic that neither team has been good at the same time since 1998.
Click to expand...

I hope he injures several of them and we win by 30.

Genghis Khan said:
Especially when you consider their QB play has been underwhelming.
Click to expand...

We go belly up the moment our QB isn’t playing lights out. Why no one expected to beat the Vikings

ravidubey said:
We go belly up the moment our QB isn’t playing lights out. Why no one expected to beat the Vikings
Click to expand...

C'mon man, we've had a few games were Dak was off and our D carried us this season

We better beat these fuckers.

Tim Cowlishaw
The Cowboys collected two more wins than the 49ers over 17 games. Does that make Dallas better or was a softer schedule the reason? Dallas was 0-2 against division winners this year. The 49ers were 3-2. San Francisco is the hotter team, but if the Cowboys’ big three pass rushers can apply the heat on Jimmy G, this will be a Dallas win. But the Cowboys rely heavily on takeaways. If the 49ers break even in turnovers, their running game will allow them to keep the ball for 33-34 minutes and keep Dak and Co. from getting the job done.

Michael Gehlken
If you love football, you have to respect all the 49ers do on offense, between the pre-snap motion, usage of 21 personnel with fullback Kyle Juszczyk, the many talents of wide receiver Deebo Samuel and stress they place on containment with outside runs. This group is a handful. But the Cowboys are healthy, talented and well-coached themselves, so they should withstand the ground game enough to advance.

Joseph Hoyt
This matchup has so many fascinating layers to it. A team in San Francisco that thrives on ball control versus a team that takes the ball away more than any other. A high-powered Cowboys passing attack against a defense that leads the league in defensive pass interference calls. A “bully ball” 49ers offense against Micah Parsons and a defense that says it’s willing to “knuckle up” and face the challenge. The margins in this one are slim, and if one team starts to stack wins in these varying layers, the scale of victory could tip in a hurry. I’m betting on it going down to the wire, and if that happens, could the kicking game be the difference?

Damon Marx
It’s time to find out if the Cowboys’ defense is the real deal. Dan Quinn’s much-improved unit has carried Dallas at times during the season, but the 49ers’ rushing attack presents a unique challenge. If Dallas can slow San Francisco just a little, the Cowboys’ potent offense will take over and be the difference. I’m more confident in Dak Prescott and the offense on AT&T Stadium’s fast surface than future potential matchups on natural turf.


David Moore
It’s hard to believe these teams haven’t faced each other in the postseason since 1995. Those games were so entertaining, so indelible, that the last 27 years seems like the blink of an eye. OK, now that we’ve established my advanced age, let’s move to this game. San Francisco should be able to run on Dallas. The Cowboys should be able to pass on the 49ers. San Francisco is a dangerous matchup, but it would be for any team in the NFC. Can the Niners win this game? Sure. But Dallas should win this game.

Kevin Sherrington
This is where the Cowboys answer the question about who they really are after one of the most enigmatic seasons in recent history. They won’t run wild against the 49ers, but they’ll complement a rejuvenated passing game. CeeDee Lamb goes for 100 yards, Tony Pollard combines for 100 total yards of offense and the Cowboys live to play another week.

Jean-Jacques Taylor
This will be a difficult game because what San Francisco does best -- run the ball and stop the run -- negates what Dallas does best, such as rush the passer and try to run the ball. Still, the Cowboys have arguably the NFC’s most-talented roster and the edge at quarterback. This is about Dallas playing its best football, mentally and physically, because they’ll win if they do that. Dak Prescott plays well as does the Cowboys’ offense and they move into the divisional playoff round with a victory.

Calvin Watkins
If everything goes well, Dak Prescott will get that rematch with Tom Brady. First, he must beat Jimmy G. That shouldn’t be a problem. However, the 49ers can run the ball and stop the run. So this could turn into a shootout, and the Cowboys should win a game like this. One player to watch is Randy Gregory. He’s been nicked up of late, but he might have two sacks before the afternoon is over. 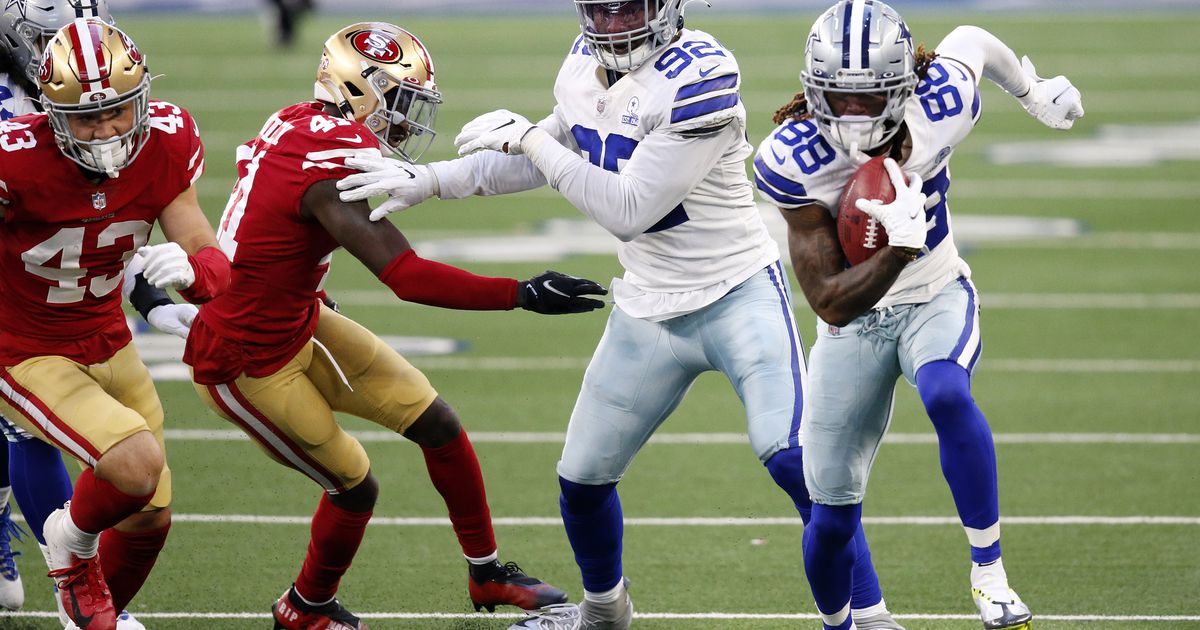 A look ahead to the Cowboys-49ers matchup on Wild Card Weekend... The Cowboys collected two more wins than the 49ers over 17 games. Does that make Dallas...
www.dallasnews.com